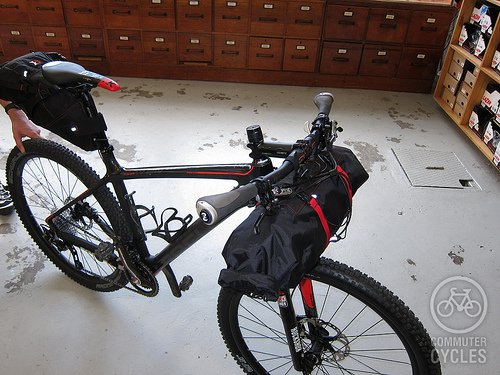 
Our decision to stock Revelate has been a while in the making. Half of us here at Commuter Cycles have mountain biking backgrounds. We’ve all done our fair share of cycle touring and camping. Combining them has always involved a lot of compromises and modifications so we were pretty excited by the prospect of dedicated bags for off-road touring when we first heard of them a few years ago. Some of us tried the bags for ourselves, pointing ourselves down singletrack, loaded with clothes, food, water and camping gear, and had a blast. We’ve recently observed, and played small roles in, the pre-ride organisation of 3 local guys who recently completed the Tour Divide, a self-supported, 4500km mountain bike race from Canada to New Mexico, and keenly took notes on their bag set ups. Whilst there are several options for bikepacking bags now emerging, we’ve found Revelate to be the best choice for us.

The demands of bikepacking, or off-road touring are different from regular cycle touring. The idea behind bikepacking is to venture off on more demanding trails than you’re average touring bike would be capable of handling, but to still be self-supported; able to camp, to carry extra clothing and food and water. Even the best rack and pannier combo will get bounced around once you leave the road and the trail gets rough. Low-riding panniers which kept the weight low and stable on the road just get in the way once the trail narrows and suddenly that same slow, stable handing that gave confidence on the road, hampers your ability to follow the twisty trail. Bikepacking bags shift the weight and bulk higher and closer to the centre of the bike, affording trail clearance and more nimble handling. The mounting is also less rigid than a rack and pannier setup. The bags are either strapped firmly in place or allowed a little bit of swinging (in the case of the saddlebag) that goes mostly unnoticed.

The mounting and weight distribution are only half the story though. Bikepacking bags, by their nature, restrict the amount of gear you can pack. A typical bikepacking setup allows 20 to 35 litres of storage spread between handlebar bag, frame bag, and saddle bag. Compare this with the 50 to 75 litres of a typical touring set up and you’ll immediately be questioning where it’s really necessary to pack that pair of shoes. From a riding perspective, the lesser load is fantastic. You’re able to ride your mountain bike as intended and uphills are less taxing. The trade-off is evident at the end of the day when the little luxuries you’re used to while touring are absent. Roughing it out in the bush is part of the appeal for us, and I’m pretty sure we must all confess to delighting in the ‘nerdery’ that comes with researching, planning, testing and talking about gear setups.

Like most of what we sell, Revelate’s bikepacking bags can be put into service for duties outside their intended use. We’ve used them for transporting things across town, carrying lunch on the commute to work, the odd small shopping trip, and for short road tours. One combo that was great for a gravel road tour was small pannier bags and lowrider rack on the front, and the Revelate Viscacha saddle bag on the rear. As you can imagine, bikepacking bags can also go some way to solving the problem of carrying gear on bikes that weren’t designed to. Road bikes, mountain bikes, cyclocross bikes all become viable options for short trips or commuting.

We’re currently stocking Revelate’s Viscacha and Pika saddle bags, all three sizes of their Tangle frame bags, and the Gas Tank top tube bag. Any of their handlebar bags and add-ons we can order in on request. 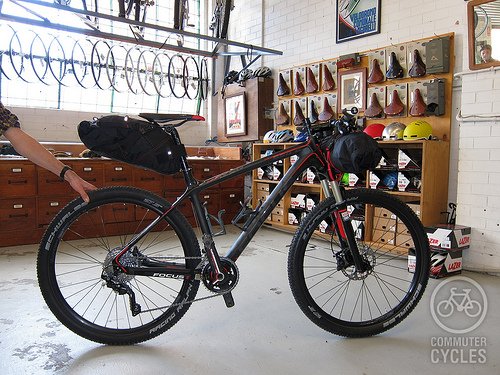 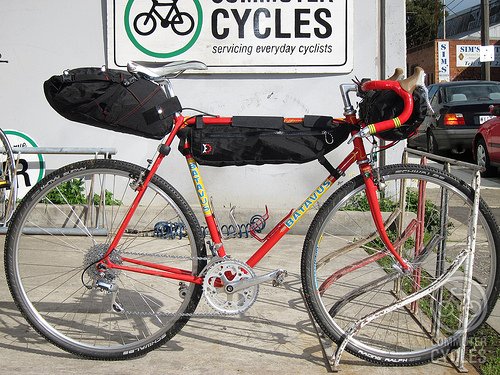 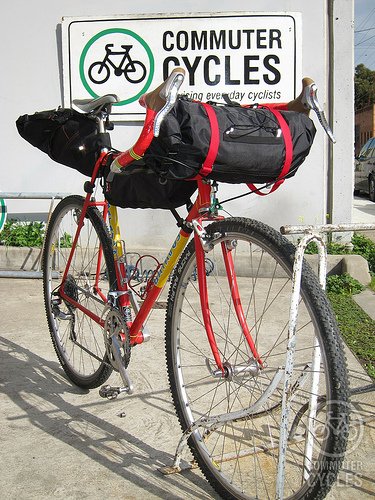