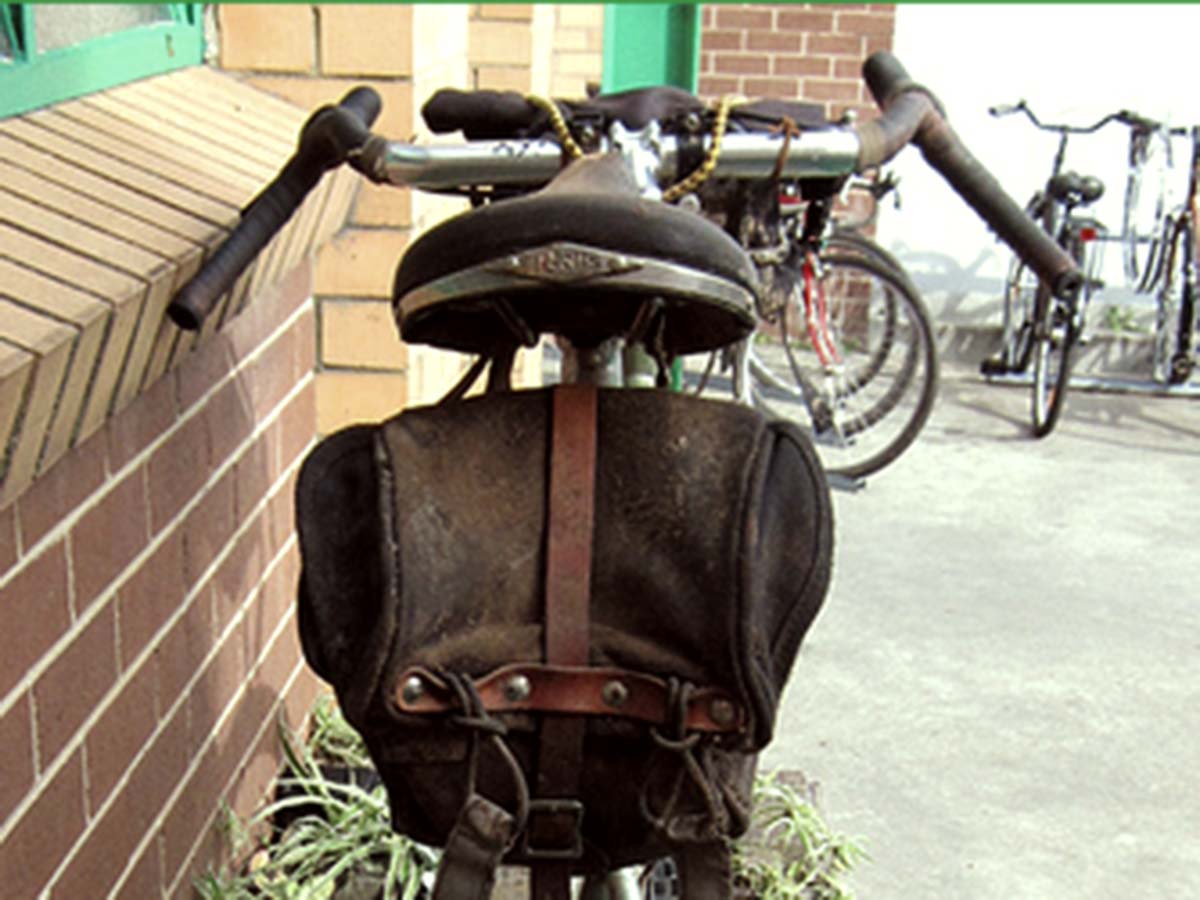 In some ways the center of Huw’s fleet is his Pivot Mach 4. It’s a serious dual-suspension cross country bike. It was built up from scratch with a load of nice parts. When it comes to his own mountain bike Huw is a bit of a weight weenie. While he was building this one up he could have told you which parts saved weight compared to the ones on his last bike, and how much, to the gram. 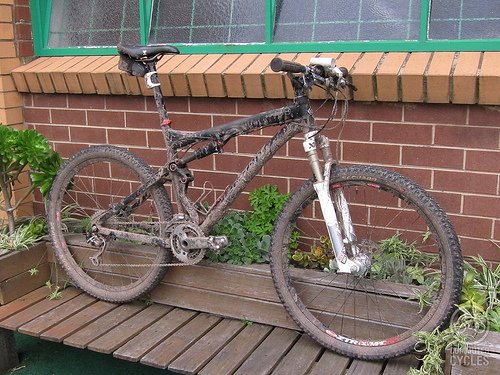 From another perspective though, it’s his Batavus that is the central bike in his fleet. It’s the one he rides the most since he commutes on it and it gets pressed into service for a wide range of extra-curricular activities – cyclocross, Gravel Grinders, a Woods Point ride. At the moment it’s set up single-speed with a Porteur rack. This is not so that it’s a low-maintenance commuter though, he did it so that last time he raced it he wouldn’t be so embarrassed if he didn’t win. Fortunately he did pretty well anyway. 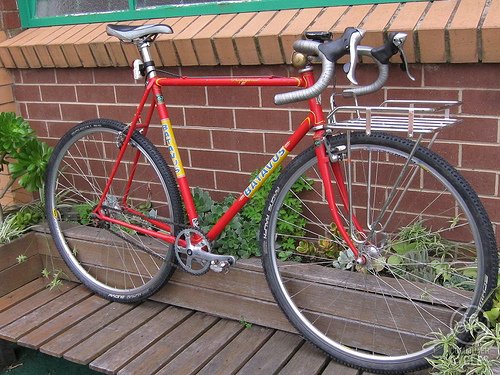 Tris has the fastest-rotating line-up of bikes of anyone in the workshop. He’s always tinkering with some element or another and swapping parts between them (Huw once asked him if he’s noticed much premature wear on his parts from constantly putting them on and taking them off). Most of his bikes spend most of their lives with no bar tape, or scavenged secondhand bar tape because he’s trying out a new setup and will probably get around to taping the bars soon, and besides, he rides with gloves, and who can decide which bar tape to use, shellaced cotton would be cool, but he has that perfectly good orange Cinelli tape somewhere in the shed…. This means he has a lot of project bikes that aren’t really bikes so much as potential bikes. If he hadn’t pulled the wheels and headset off one to use in another it would be a bike. As it is it’s an impediment to get to the bike behind it, which has a seatpost on it he wants for the latest bike he’s working on. 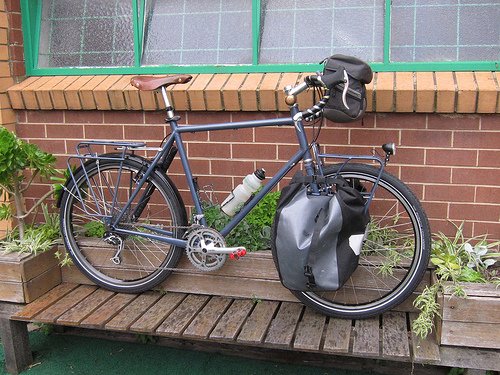 He does have some rideable bikes at time of writing though, which is lucky since he can’t drive and doesn’t like public transport. Both these bikes are frames he built himself. One a road bike with a weird mix of Dura Ace 9 speed and Campy Victory and the other a touring bike with racks painted to match the frame. Neither of them have bar tape yet, but there’s some some splash tape somewhere which…. 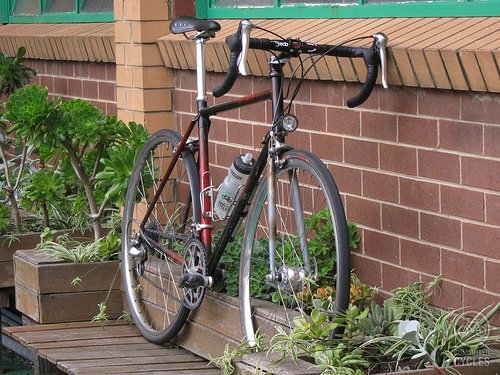 Scott has carefully thought out compartments that his bikes fit into and his bikes are designed to do their job in that department. He’s not adverse to a bit of bling or trying out something unusual but all of that comes second to satisfying a functional role. 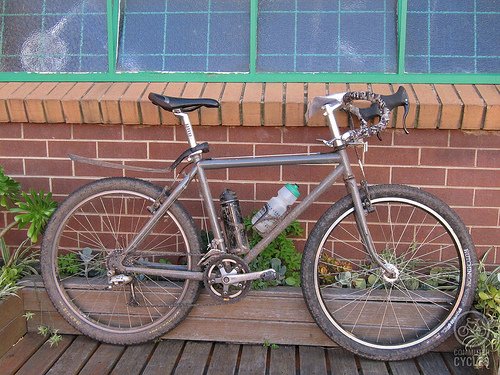 The bike he’s had longest (and it’s a long time… longer than anyone else at Commuter has had a bike) is his mid-90s Giant Iguana which he raced as a mountain bike as a youngster, then commuted on for years when it was powder coated reddy-orange and now has as his tourer (and sometime commuter) powdercoated grey. He recently realized that the only part on the frame he hadn’t replaced was the seatpost binder (he had even built a new fork for it), so he bought a NOS XTR seatpost binder for it to complete the process. If the frame ever needs to be replaced then it will raise philosophical questions about whether or not it is the same bike. 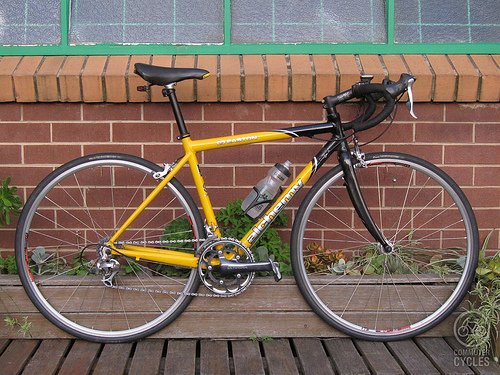 He has an Aluminium road bike made by Alchemy and an aluminium Giant XTC hardtail mountain bike with blinged-out cranks that he bought just to make Huw jealous. 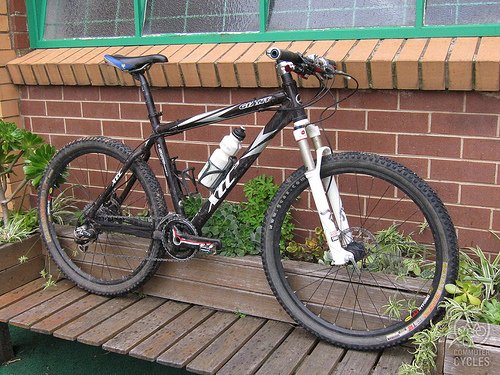 His most exciting bike though is his polo bike. He made the frame himself. It has an extremely short wheel base, can turn on a dime and looks really mean. 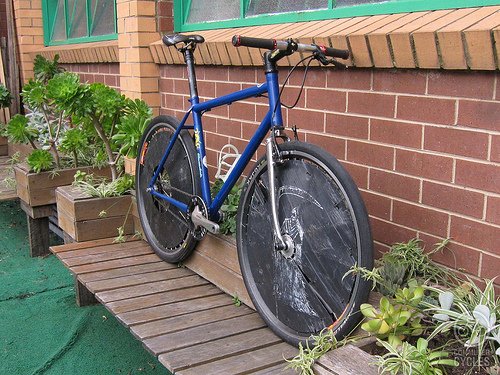 He has also recently acquired a new secret weapon in the quirky-bike wars that have engulfed Melbourne of late.  This is a bike he drooled over as a teenager – an AMP research dual-suspension disc brake bike that harks from an era where front suspension and V brakes were new and exciting. 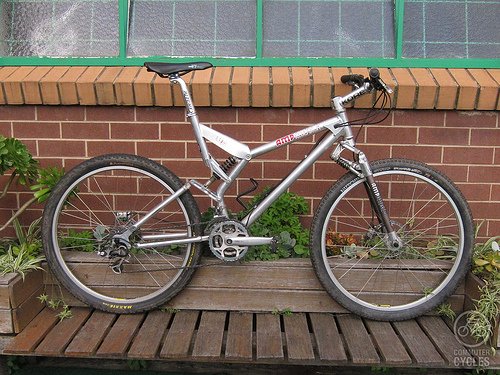 Jed is the opposite to Tris in terms of getting bikes on the road. He takes his time, gathers the right parts and puts it together once. Or that’s the idea. As a result he has as many unrideable bike projects as Tris but where Tris’s were rideable for a few hours before he stole parts from them to put on another bike Jed is just one part short of the complete ensemble, and one day now he’ll probably have 6 amazing bikes finished all at once. 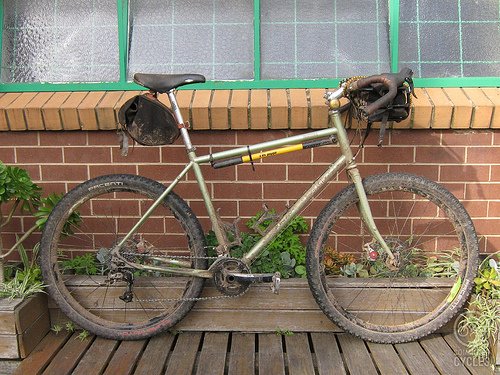 His regular rider was his theft-proof Crosscheck. It had ratty looking parts on it that were all in mechanically good order and were actually pretty sweet and blingy in their own way, but a bit scuffed, mismatched and generally cosmetically challenged. The problem is the bike actually looked quite nice in spite of all this, and it got stolen.  This left him one bike for both commuting and riding offroad – fortunately the bike was a Rawland Drakkar and more than capable of both.

Luke come from a mountain biking background. And by mountain biking he means something the rest of us don’t even want to contemplate – something that needs lots of tyre, lots of suspension, great brakes and a willingness to hurt yourself if things don’t go according to plan. The bike that best expresses this side of Luke’s riding personality is his Santa Cruz, a big-hit dual suspension beast. But the Santa Cruz has also been pressed into service doing things its designers wouldn’t have anticipated. Overnight touring in the Victorian Alps? Sure. As it happened the bike was great for that. Cross country riding on the fairly non-technical Yarra trails? No worries. See for yourself most Wednesday nights. 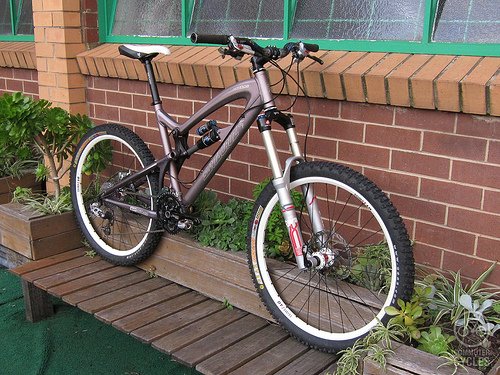 Luke also has a singlespeed, fully rigid, rim brake mountain bike and a Doublecross which started out all Ultegra and is getting more and more idiosyncratic as he replaces the modern swanky bits with practical hard-wearing sensible bits. 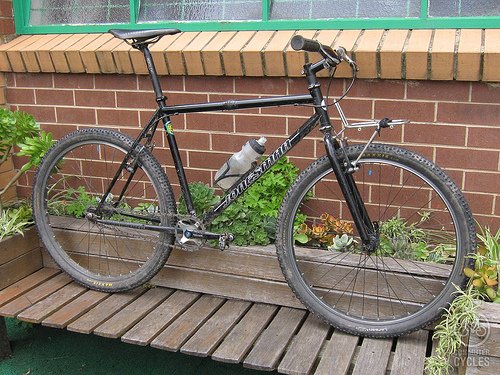 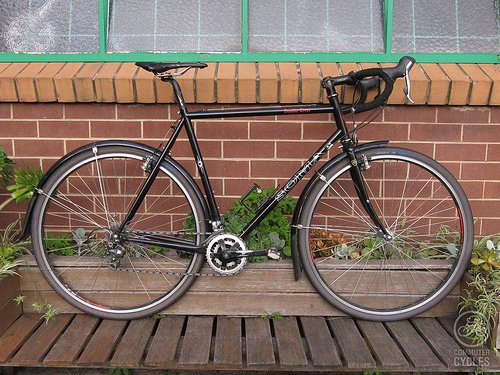 It has been suggested that Val gets messages from God about how to build bikes. (True story – Matt said it and he meant it.) He normally takes fairly humble vintage frames and turns them into works of art. He has a touring Mixte, a chrome single-speed and a Raleigh gents bike which all mix up the old and the new in a way that is unmistakably Val’s. He’s working on a new bike as I write, and by new I mean genuinely new – non-secondhand. His first new bike in 16 years! Details about that one will be drip-fed later. 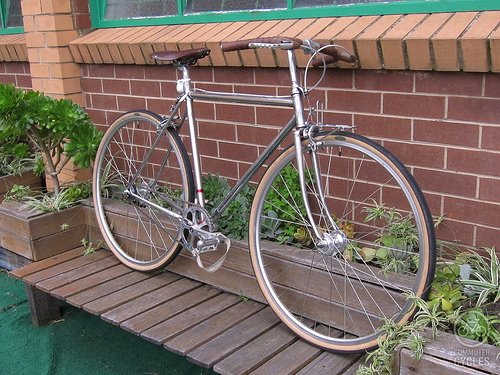 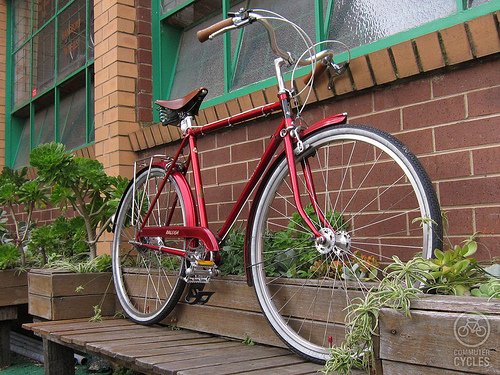 Jeff has the best collection of vintage bike of any of the Commuter staff. His collection even includes an Alex Singer. He has a thing for obscure shifting systems that require a bit more finesse to use and a lot more patience to install than modern things. Where most of us think of the early 70s as seriously vintage, Jeff is often on the lookout for a particular handlebar from the 40s to complete a build, or part of a brake from the 30s.