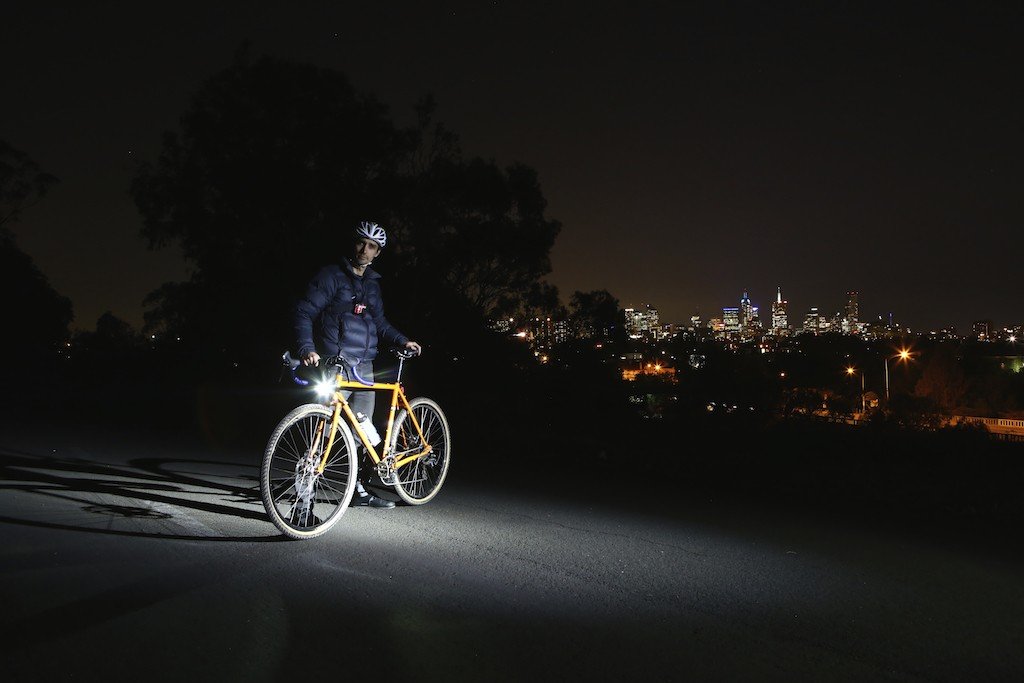 What is dynamo lighting?

If you’ve never heard of dynamo lighting, basically it is a system of lights that is powered by you as you pedal the bike. Imagine never having to charge battery lights again. Imagine lights that come on as soon as you turn a pedal, and slowly fade minutes after you stop riding. A definition for a dynamo is:

a machine for converting mechanical energy into electrical energy, typically by means of rotating coils of copper wire in a magnetic field.

Basically it’s a backwards electric motor. Rather than using electricity to create rotation, a dynamo uses rotation to create electricity. There are two common places you’ll find a bicycle dynamo – a bottle dynamo is found beside the wheel and a hub dynamo is found in the middle of the wheel. If you have a lot of experience with bikes you may have come across a bottle dynamo before.

As you can see, bottle dynamos are mounted beside the wheel and have a little wheel which runs against the tyre, converting its rotation to electricity to power the attached light. Bottle dynamos typically created noticeable drag while riding and as a result they had a mechanism to release them away from the wheel when they weren’t required. With halogen globes, the light output of bottle dynamos wasn’t particularly impressive. If your ideas of dynamo lighting are rooted in the era of bottle dynamos, it’s time for a reset. These days, most dynamos are hidden away in the front hub and are so efficient that you barely notice the small amount of power they draw. Plus, modern LED lights emit such a large amount of light for the small amount of electricity fed into them that you can potentially be mistaken for a motorbike.

How much drag is there?

The vast majority of modern hub dynamos draw only 3 watts of power. For reference, a rider can output anything from 50W (unfit) to 2400W (record-breaking track rider for several seconds), and a fit rider can maintain 300+W for long distances. In practice, I find that the light attached dictates the drag noticed by the rider. I find the draw of running most dynamo lights completely imperceptible and as a result leave them on all the time. Only my high-powered Busch + Müeller IQ-X light gets a little bit of noticeable drag, and only at high speed. That light is often mistaken for that of a motorbike, so I am happy to accept a tiny bit of drag on a downhill.

How bright is that light?

Measurements of brightness of bicycle lights is fraught with confusion and inconsistencies. There are two commonly used values, Lumens and Lux. Both give a vague impression of what you’re likely to experience and they cannot be compared interchangeably. Lumens refers to the total amount of light output from the bulb. Almost all of our battery lights give output in Lumens. It is typically a large number of between 50 and 2500 and does not take into account how the light is shaped by the reflector surrounding the bulb and how it is distributed on the road in front of you. Lux is a measurement of lumens per square metre. Although this is a step closer to what you’re actually getting on the road in front of you it is still open to inconsistencies of how it is measured. The Lux value given by Busch and Müeller for their lights is taken from the road 5m in front of the bike. Confused yet?

As a rule of thumb, an equivalently-priced dynamo light is probably going to be as bright as a battery light. At the time of writing the Owleye Highlux is $70 and 30 Lumens. Our cheapest dynamo light is the Illumenox Vega for $80 with 35 Lumens. As mentioned, 30 Lux is just bright enough for an unlit bike path. The Busch and Müeller Cyo at 60 Lux makes for a more comfortable nighttime commute on dark paths and unlit trails. If your riding is a bit more adventurous and you want to hit country backroads in the dark start looking at the Busch and Müeller IQ-X with 100 Lux.

We place more importance on beam shape than most bike shops. There are two reasons for this. Firstly, a well-shaped beam makes for a more efficient distribution of all of those Lumens your light is pumping out, increasing the Lux on the road in front of you. Secondly, a well-shaped beam is a whole lot more pleasant for riders and motorists travelling in the opposite direction. To achieve a well-shaped beam the LED sits in the top of the light housing and points backwards into the reflector. All of Busch and Müeller’s dynamo lights have this arrangement, in part due to strict German standards. By contrast, most battery lights have the LED in the middle pointing outwards with a reflector surrounding it to coax light into the right direction. The aforementioned Owleye Highlux is the only battery light we have found that has a properly shaped beam. At 150 Lumens and 30 Lux it’s a pretty good unit for around town and just bright enough for an unlit bike path. If you can’t justify the expense of a dynamo system this is a pretty good front light.

What happens when I stop at the lights?

Most dynamo lights have what’s known as a standlight. A standlight is a capacitor inside the light that holds a bit of charge ensuring that the lights stay on for a small amount of time after the dynamo stops generating electricity. In practice riding a couple of hundred metres is usually enough to charge the capacitor and ensure the lights stay on for the length of a change of traffic lights. High-powered lights often drop to a low-beam while on the standlight to conserve power and lengthen the time the standlight stays on for. Rear lights can sometimes hold enough charge to stay on for upwards of 15 minutes. Some even have a discharge button so you can effectively turn them off when parking the bike.

Do dynamo lights have a flashing mode?

The short answer is no. Because dynamos produce AC electricity the light can flash when the wheel turns very slowly and without any charge in the standlight, but they do not have a flashing mode. The primary reason for this is strict German regulations (most dynamo lights are German) against flashing lights. Views differ, but my own opinion is that once a light is greater than 15 Lux or about 40 Lumens (as all of our dynamo range is) it is bright enough that a flashing mode is a) unnecessary for being seen and, b) detrimental to all other road and trail users around you. I have almost driven off the road and into a cyclist in my car when another cyclist appeared with 1000+ Lumens flashing in my rear vision mirrors. Exceptions would be on desert highways and country backroads where I would still argue that bright, reflective clothing or flags would be more effective for high-speed traffic.

How do I get a Dynamo hub onto my bike?

To get a dynamo hub onto your bike there are two ways to go about it. Either you can replace the hub and spokes alone, or you can replace the whole wheel. It may come as a surprise but replacing the whole wheel is often more cost effective. This is down to the fact that complete wheels come from a distributor who builds them using wheel building machines, rather than being hand-built by one of our mechanics. Without going too off-topic here, a hand-built wheel takes longer to build, gets much closer attention and will typically last longer than a machine built wheel. For a typical commuter bike, a machine-built wheel will be sufficient. If you are using higher quality components and/or particularly concerned with aesthetics, a hand-built wheel is likely to be better suited.

Our favourite hub is the Schmidt range of hubs from Germany. Whilst these are a little more expensive that other offerings from SP Dynamo and Shimano, we have found bearing life to be 3 to 5 times better so the initial investment pays off in the long run. For those interested, dynamo hubs weigh about 400g, which makes them about 200g heavier than a regular hub.

A dynamo can power my lights, can it also charge my phone?

Yes, you can charge small electrical devices from a dynamo, but it’s not straight-forward from an electrical engineering perspective which means it’s not cheap. To put it simply, the output from a dynamo is significantly different to what is required by a phone or GPS. There are several options for devices that do this conversion. One is Busch and Müeller’s Luxos U light, which includes a built-in USB output. More robust options are the headset top cap-mounted Sinewave Reactor and mount-it-anywhere Sinewave Revolution. Sinewave products are injected with silicon to make them completely waterproof. A recent addition to our offerings is Australian made Klite  look out for an in depth report on these soon.

What about rear lights?

So far the focus has been on headlights because that’s where the most light is required and hence the biggest gains for a dynamo system are to be made. Rear dynamo lights on a commuter or touring bike can be so neatly installed that you don’t notice them until the bike is moving and they’re on. One of the neatest mounts is a Busch and Müeller Secula bolted onto a mudguard (fender) with wiring routed underneath the guard. Mounted like this it looks like a simple reflector until it’s powered on. 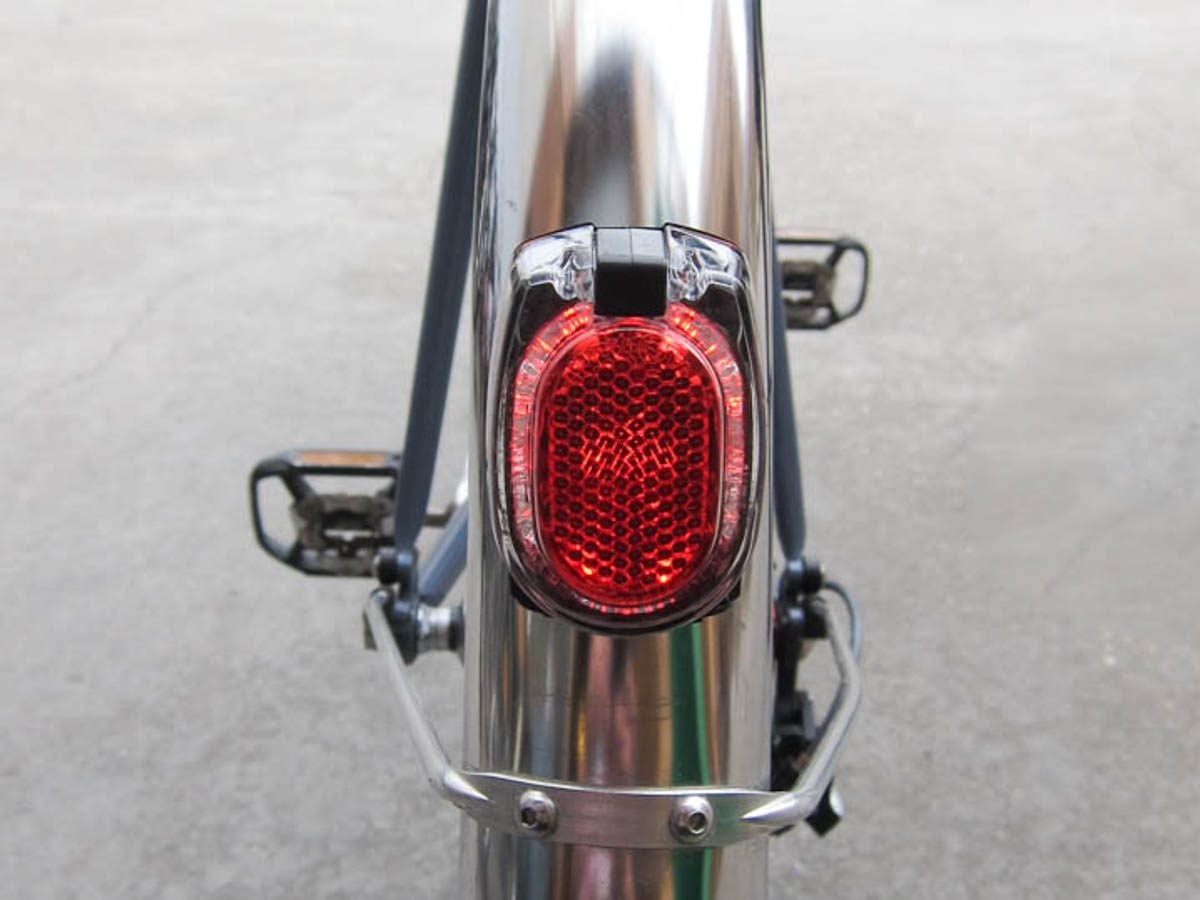 No Lux rating is given for these lights because unlike front lights they aren’t directed to the surface of the road. However, they are easily as bright or brighter than an equivalently-priced 50 Lumen battery light. They also tend to have better side visibility. The same light is available in a seatpost-mount and Busch and Müeller also make great rack-mounted lights.

So how much does it all cost?

You may have been doing the maths while reading to this point and have figured out an approximation, but if not here are some numbers. Dynamo lighting isn’t cheap initially but those of us in the workshop who have quality dynamo set ups have been using them for 5+ years without fault. There is no battery degradation to worry about and barring the rider taking a spill into the Yarra, your lights will work indefinitely.

The cheapest we can do a decent front-only dynamo setup for is about $400 installed. A complete wheel with an SP hub will cost about $300 (depending on choice of spokes and rim), and then it is $80 for an Illuminox front light, and about an half an hour’s labour ($45) to bolt it on and wire it up. You’re still stuck with battery rear lights but they typically require charging less often and a dynamo tail light is easily added on later.

If you want the best of everything, rather than fitting a machine-built wheel you would have a Schmidt SON hub built into your existing front rim, fit an IQ-X to the front and either a Secula or TopLight to the rear. By the time you add all this up it’ll be north of $825. Add Sinewave USB charging capabilities and you’re likely to hit the $1000 mark. This sort of setup is more often part of a custom built bike rather than an add-on to an existing bike.

I hope this article sheds a bit of light on the question of dynamo lighting.

5 thoughts on “A Primer on Dynamo Lighting”