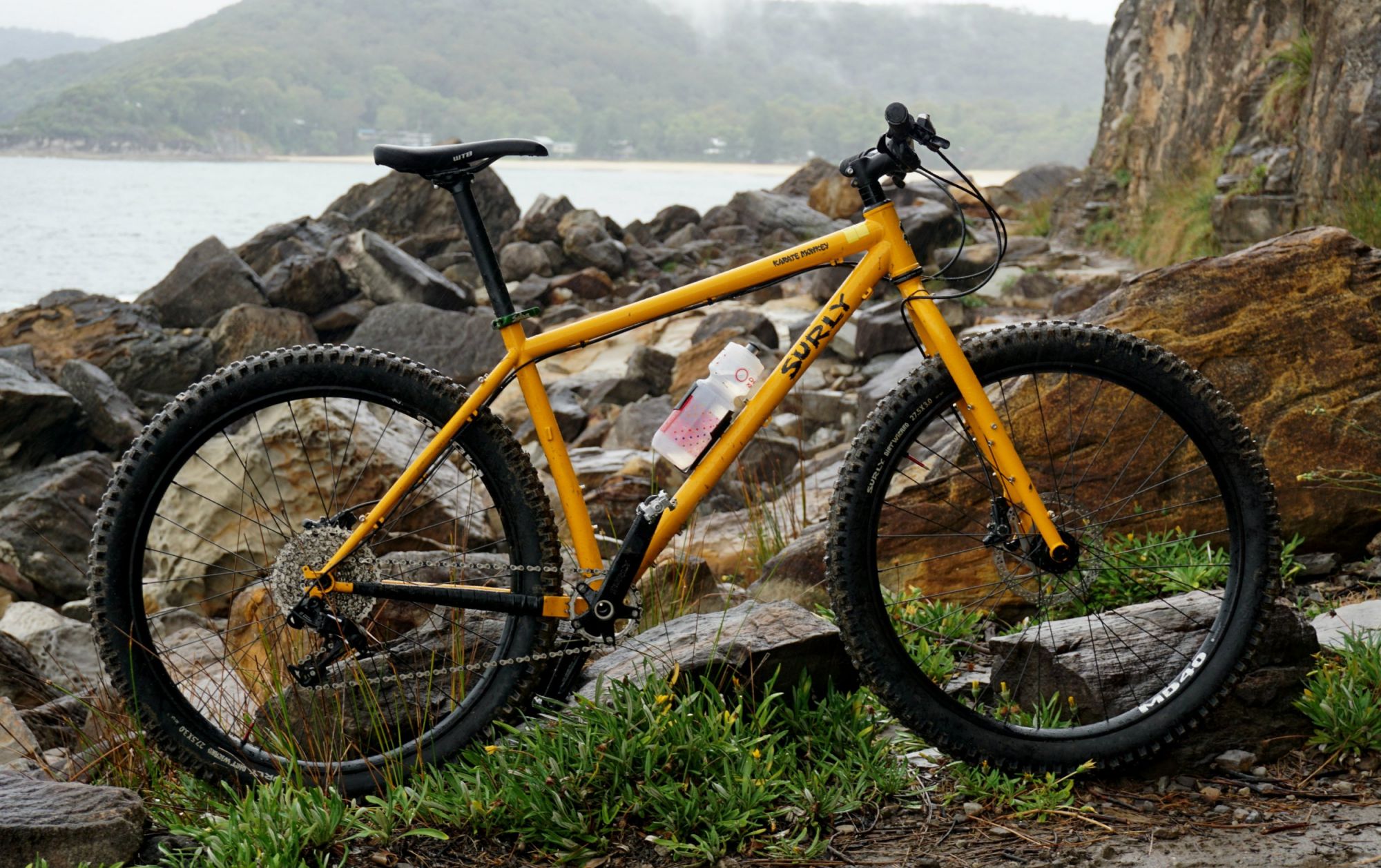 
Just before the new year the guys from Surly were in town so we headed up to the central coast to meet with them and check out the new Surly range for 2017. We were most interested in the new and redesigned Karate Monkey. This was the bike which started the 29er revolution being the first mass produced 29er available back in 2009.

25th May ###UPDATE###  We have a demo bike in stock for a limited time, if you want to experience what all the hype is about, this bike is available for overnight loan, call us for more details.

UPDATE ### There is currently good stock of both frames and complete bikes so get in quick before they all go.

Since then the 29er has become the go to for most forms of mountain biking and also a popular choice for recreational cyclists too.

So why change a good thing?

Eight years is a long time to keep the same format when the bike industry changes platform yearly. The guys at Surly do innovation differently to most, often setting up the trends for the years to come and then moving onto the next big thing. A few years back they created the 29+ category and were left a little behind when others started producing 650+ bikes. This new wheel size has been adapted to the new Karate Monkey which means you have a choice of wheel sizes with just one frame. Surly didn’t just stop there. This bike can take just about any of the growing number of new axle designs through the use of their ‘Gnot Boost’ system. Got a set of 142x12mm 650B wheels and a set of 135mm QR 29er wheels lying around? This bike will take them all!

It is assumed by many that Surlys are simple off the shelf Cro-mo frames with nothing fancy done to the tube sets. This couldn’t be further from the truth. The toptube and downtube of the new Karate Monkey are ovalized and butted to maximise front end stiffness. Other sections of tubing are thinned out to save weight.

The 2017 Karate Monkey comes in a 1×11 sram equipped version and a single speed 29er version. The front end has boost spacing ready to throw on a suspension fork and hit the trails, there is even provision for a dropper post. That’s not all, unlike previous models this one has all the rack mounts to turn it into a bonafide off road touring machine!

I had a go on the 650+ 1×11 speed model on a very wet and rocky coastal single track. It is an extremely playful and fun machine. With the big tyres it had more of the feel of an all mountain dual suspension bike and it gripped on everything I pointed at it.

Other changes to the 2017 line up are a cross check flat bar, 650+ ECR’s in smaller sizes and a non suspension corrected Troll.

We have a small shipment due late May which is selling fast so if you are keen on one of these machines get in quick!