To say we’ve been excited for the arrival of Shimano GRX is a massive understatement. For those that have not come across it yet, GRX is Shimano’s new groupset designed for adventure road and gravel bikes. We’ll skip all the technical stuff (you can head HERE to get the full low down) and stick to talking about the things that excite us about it and what it’s like to ride. I’ll be taking care of the initial details while Commuter family member Tom had the opportunity to properly ride GRX recently and will be giving us his thoughts.

Firstly, everyone has a different definition of what ‘adventure road and gravel’ actually means. For many people coming from road cycling that simply means long days on smooth gravel. For us here at Commuter it’s about one word. Versatility. That bike should be able to really move on the tarmac or a smooth gravel road, but also should be geared low enough to handle loose double track and not force you into walking when you’re carrying some load. This has been our sticking point with twin chainring groupsets the last few years, and GRX looks like a massive improvement on this. 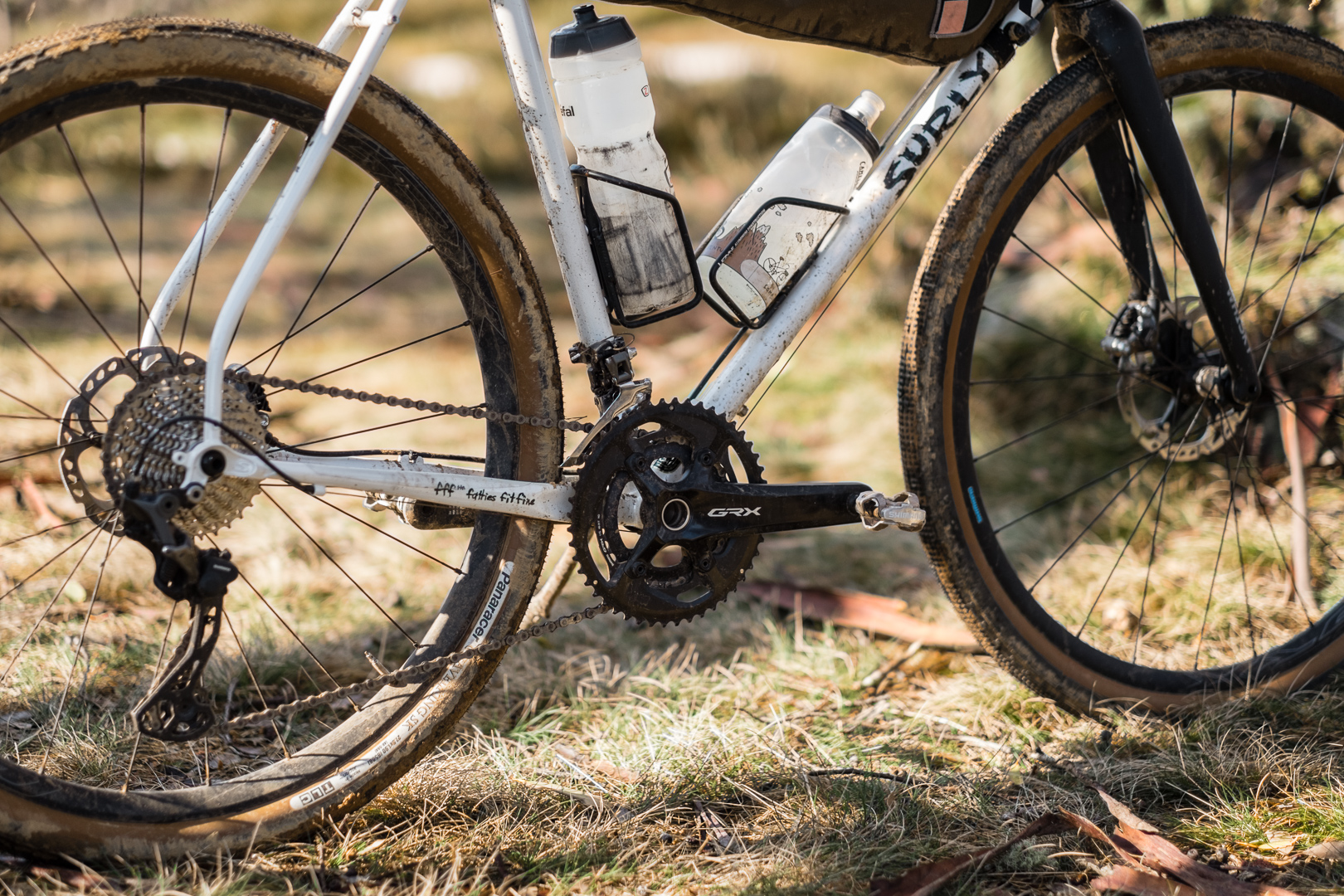 On a traditional Shimano dropbar groupset the lowest gear you really had access to hovered around the one-to-one ratio. You likely had a 34 tooth chainring up front, and maybe a 36 tooth out the back if you were lucky. Not loads of fun on loose, steep climbs carrying bikepacking gear. This is certainly feedback that Shimano have been listening to and the gear range on GRX makes us smile in a big way.

Firstly, the small chainring up front is a 31 tooth. Now, pair this with your choice of 34, 36 or our preferred 40 teeth out the back and you have some properly low gears for some properly tough adventures. With the extremely popular SRAM single chainring groupsets shooting for a gear this low would mean you’d lose a lot of top end. Not on GRX. With a highest ratio of 48 to 11 teeth there’s still a tonne of speed available for those glorious tailwind afternoons and racing your friends down Mount Donna. The big chainring features all the shifting ramps and pins you’d expect from Shimano and it ought to shift amazing. See Tom’s ride review below for the answers. 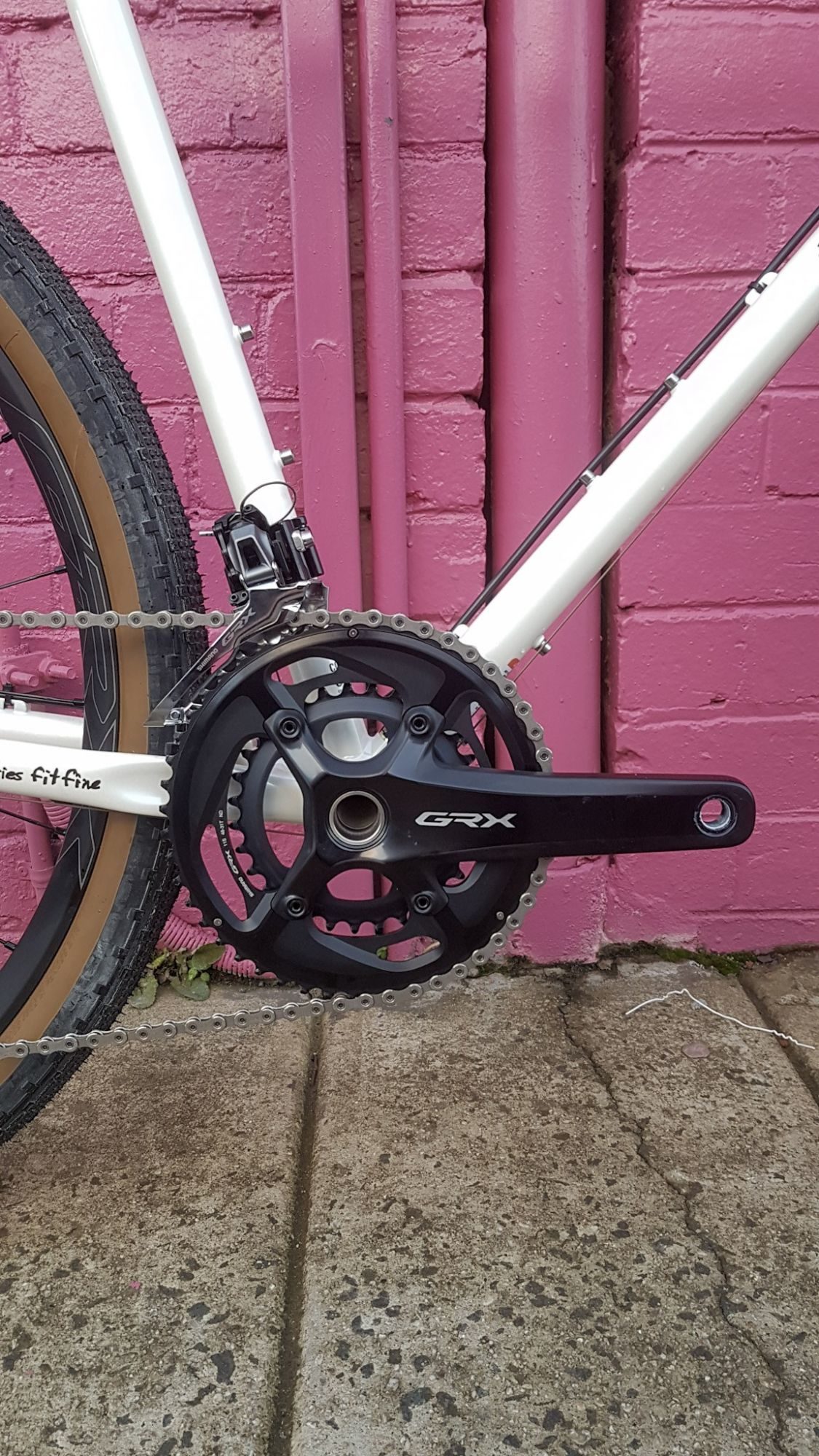 The other thing we weren’t a fan of with Shimano’s older groupsets was that they were kinda rattley. Once you’ve ridden a drivetrain with a clutch derailleur (like all of SRAMs 1x drivetrains) you’ll fall in love with the quietness of the system and riding a non-clutched system with a front derailleur will just about drive you nuts from ratlley chain noises. Shimano have done a great job of this with GRX too. Like all of their high end mountain bike derailleurs, Shimano added an adjustable clutch mechanism to all GRX rear mechs. Not only should this ride a LOT quieter, it should also shift smoother on rough terrain, something that’s certainly noticeable on current 1x gravel drivetrains. 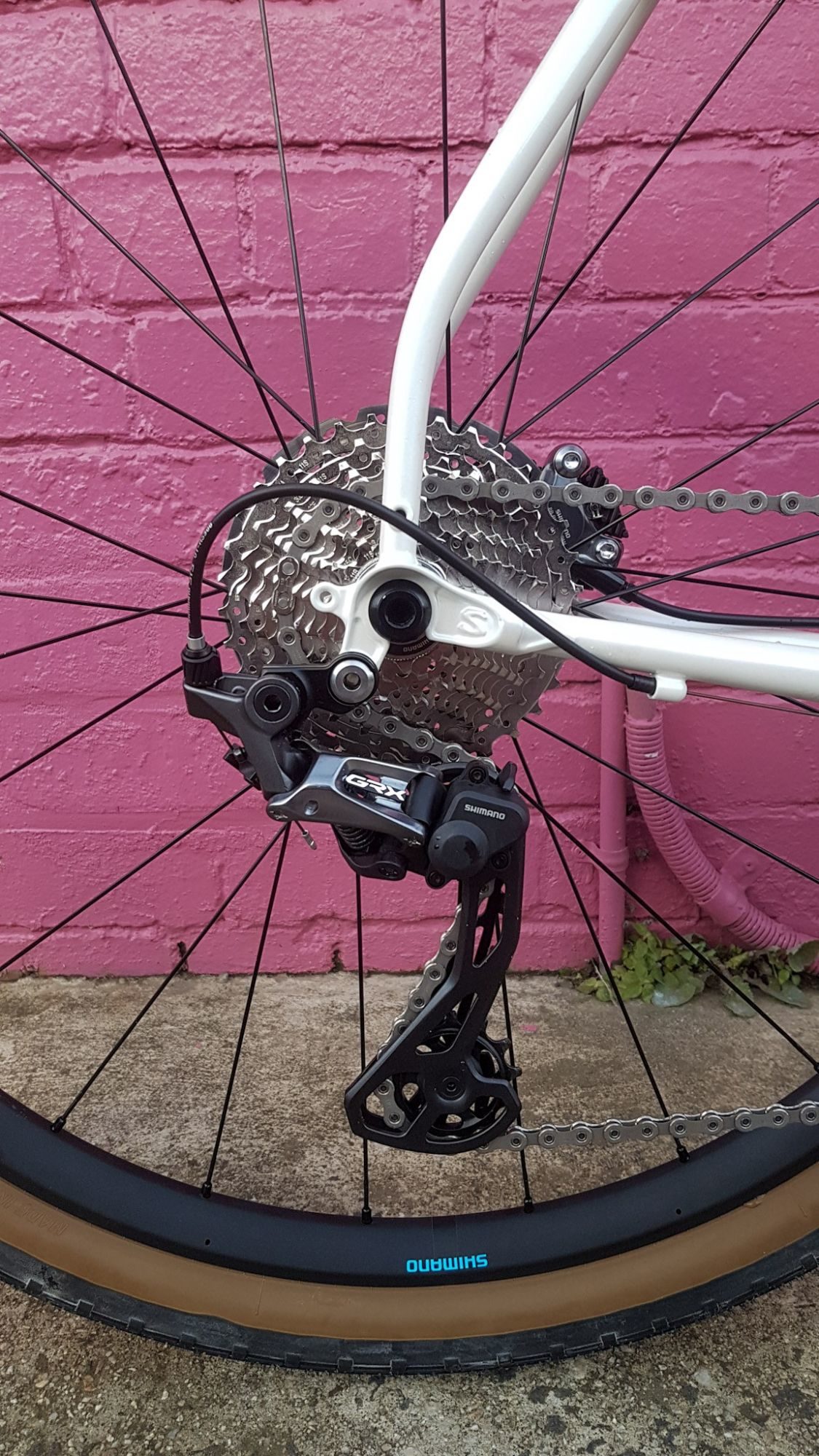 I guess it’s pretty easy to tell we’re excited about the drivetrain. We’re also very much looking forward to spending some time on the new GRX brakes. Not only do they look fantastic, but there are some really nice ergonomics changes we can’t wait to get our hands on. Literally.

Most drop bar brake levers are designed to give GOOD braking with your mitts on the hoods, but the real power and control is with your hands down in the drops. Shimano realises that not everyone has the functionality or desire to be riding in the drops on rough descents and built the GRX brake levers accordingly. The break lever pivot location on the GRX levers was relocated to enable much more powerful and comfortable braking from the hoods. Even on the shop floor this in noticeable, and I for once can’t wait to read what Tom thinks. The lever blade shoe was also substantially changed to suit the more flared bars typical of an adventure road and they look super comfortable. 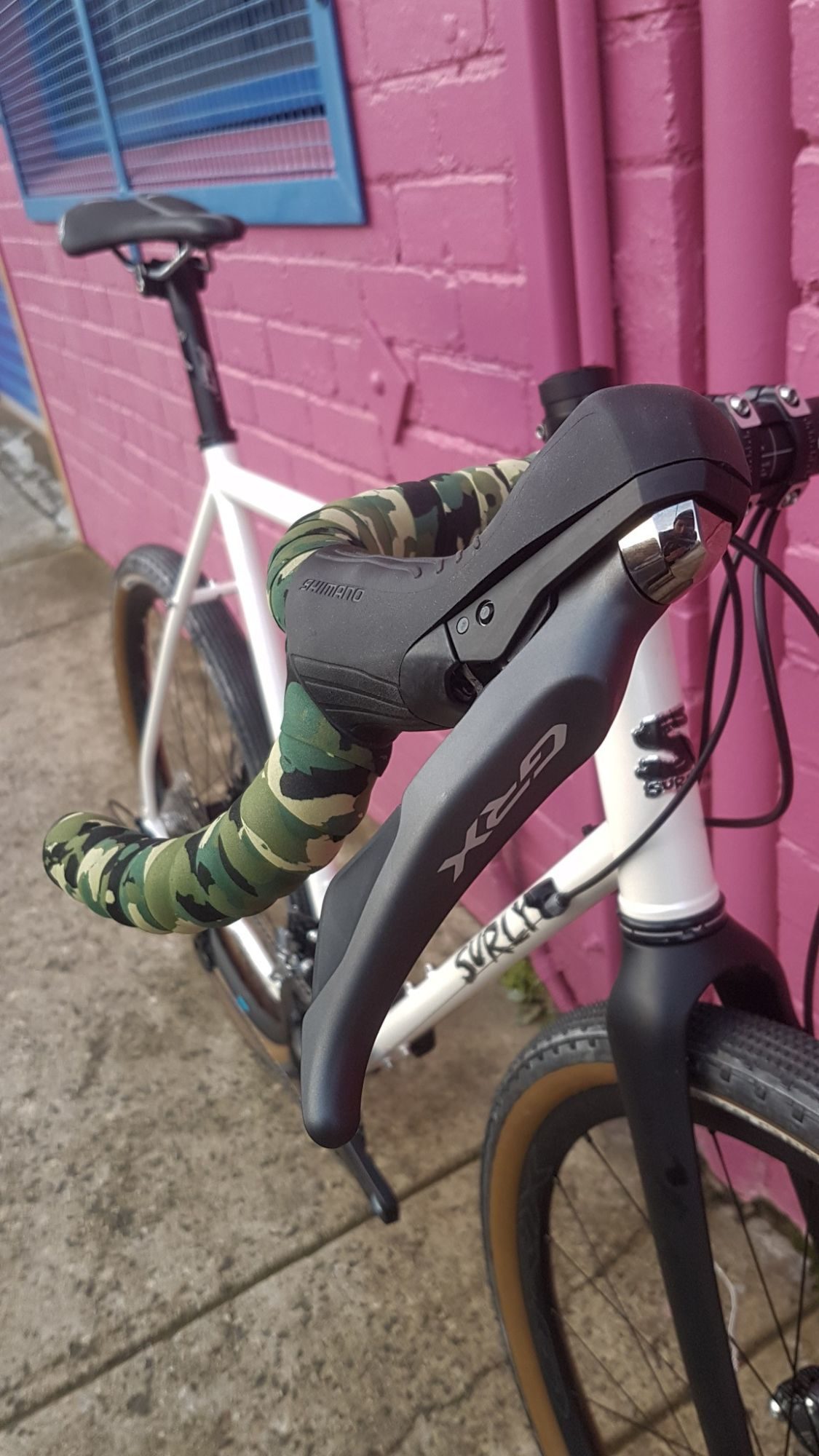 Brake calipers themselves are in the newer flat-mount style, though we have definitely been hording some older post mount calipers so you can use GRX on a frame with post mount, like a Soma Wolverine. 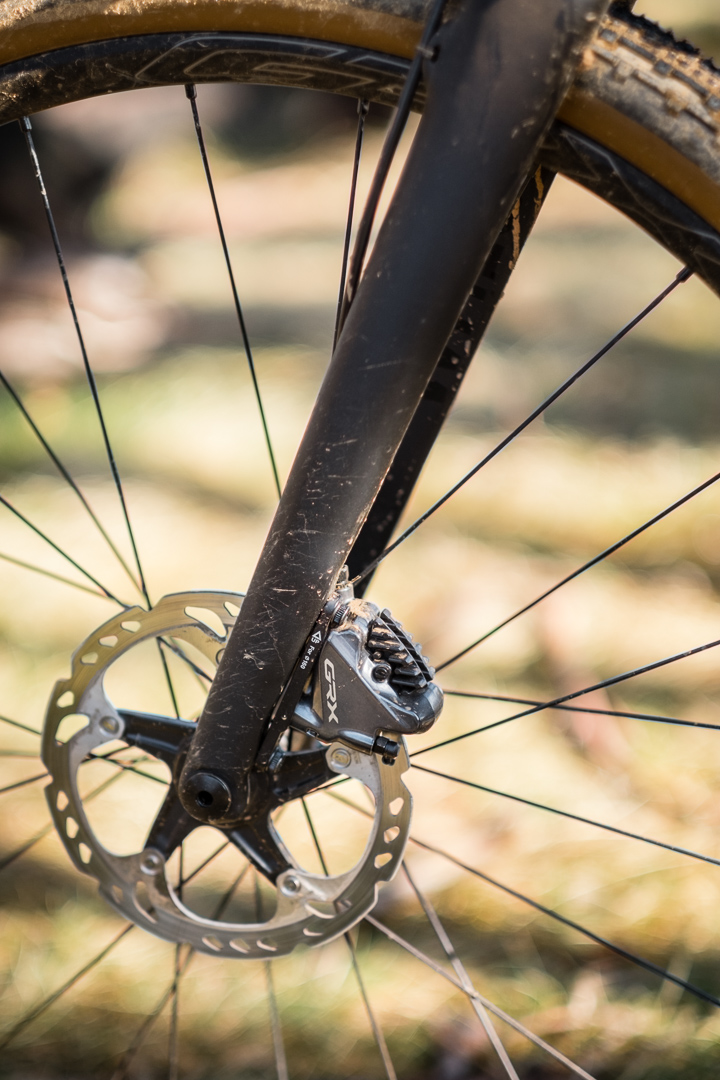 The last piece of the puzzle is wheels. We’re pretty big fans of handbuilt wheels here at Commuter, but the new GRX wheelsets are everything we’d like a factory wheelset to be. A good weight, nice a wide, great looking and they seem as though they should be able to take a beating. With that, I’m going to hand over to Tom for his thoughts on the groupset and wheels after a solid weekend in the Jagungal Wilderness and the Wagga Gears and Beers Festival. 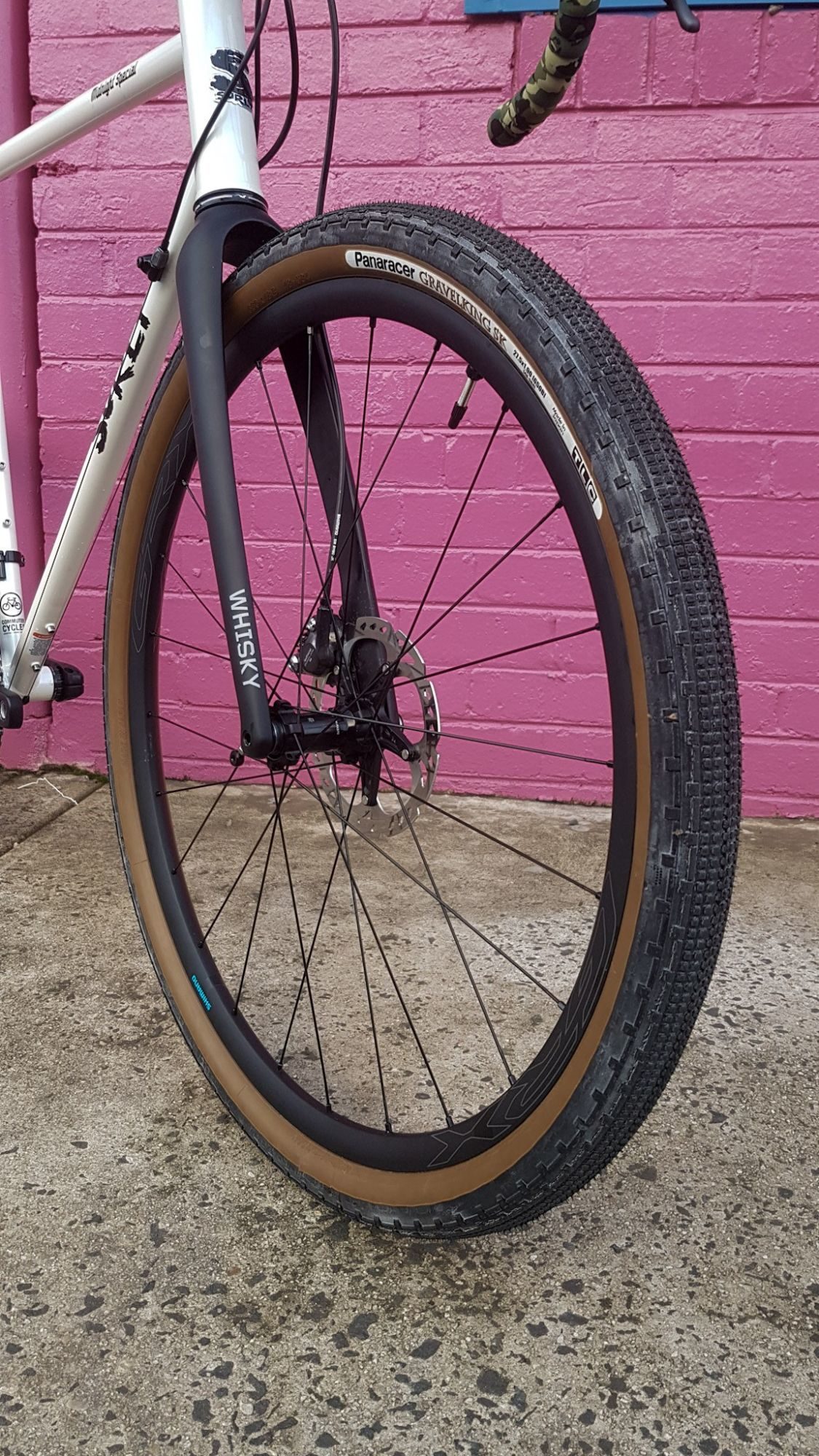 When I was given the opportunity to borrow a brand new bike with a brand new group set for a full weekend of riding I was pretty excited. I had ridden the bike before but only out the front of Commuter, but wow did it feel good.

The bike in question is a 58cm 650b Surly Midnight Special with a complete GRX groupset and Pro finishing kit. The weekend was set to be a cracker, with a chill night in a hut in the Jagungal Wilderness on the way to the Gears and Beers festival held in Wagga Wagga. I’d get to test the bike on 30kms of rough as guts fire roads and 130kms of road and gravel, perfect. 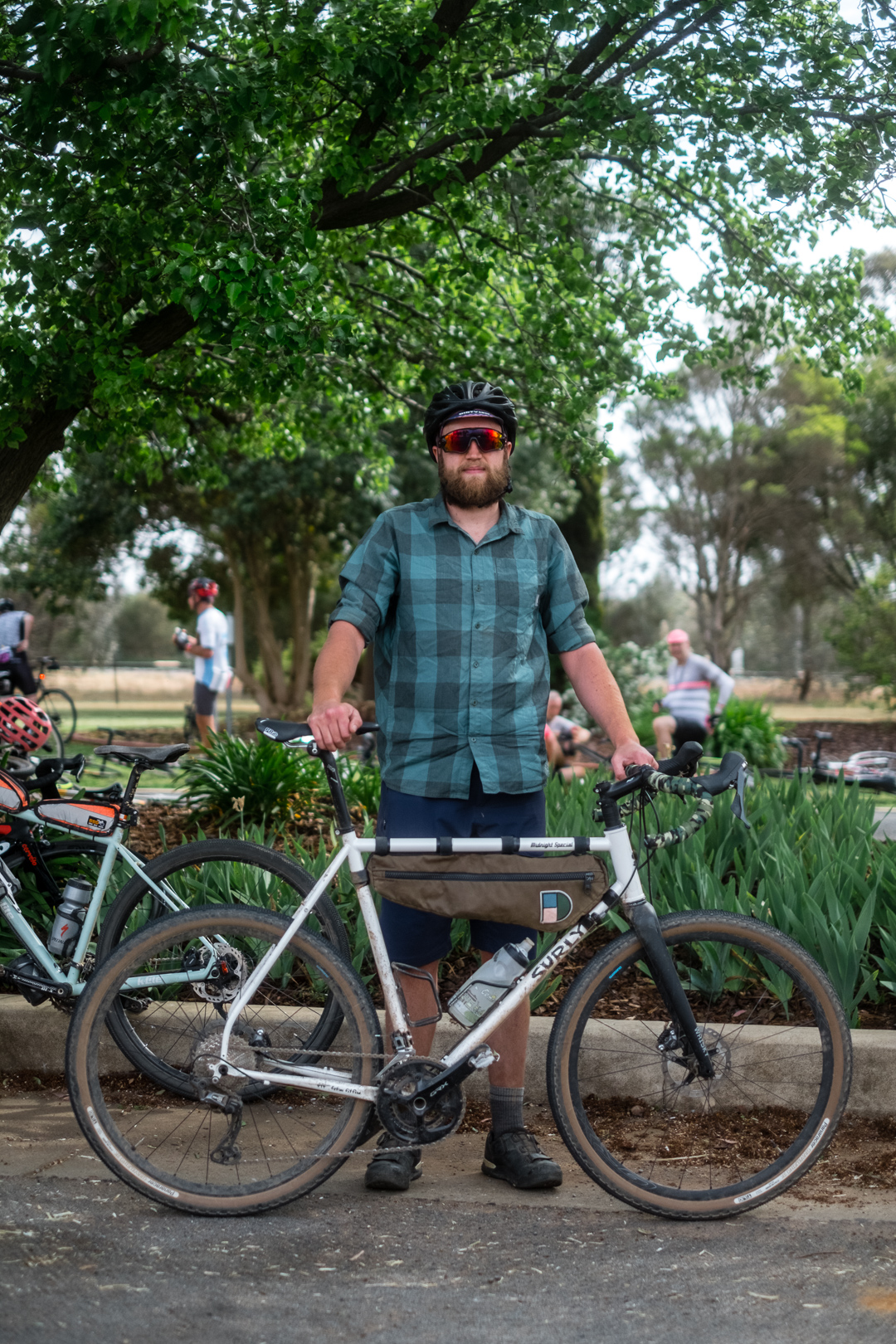 The Jagungal wilderness is an area in the northern section of kosciuszko national park. It’s a bikepakers paradise as the tracks are only open to hikers and bikers. It’s also an area of amazing natural beauty with grassy plains, gnarled snow gums and wild flowers everywhere. So we loaded the bikes, loaded the car and set out at 5am on a Friday morning. Five hours later we reached our entry point at the Round Mountain car park.

As we set off I instantly dropped into the lower front ring and pretty much left it there for the majority of the ride to the hut. I was pretty thankful for the low gearing as the tracks were steep and rutted with lots of loose rocks. One thing I noticed instantly was how grippy the GRX hoods were compared to the Ultegra hoods I have on my personal gravel bike. They seem deeper and also have a nice rubber ribbing on the palm section that really holds your hands in place on the rough descents. On the actual lever itself there is a subtle indentation that my fingers naturally found and seemed to stick to no matter how bumpy it got. 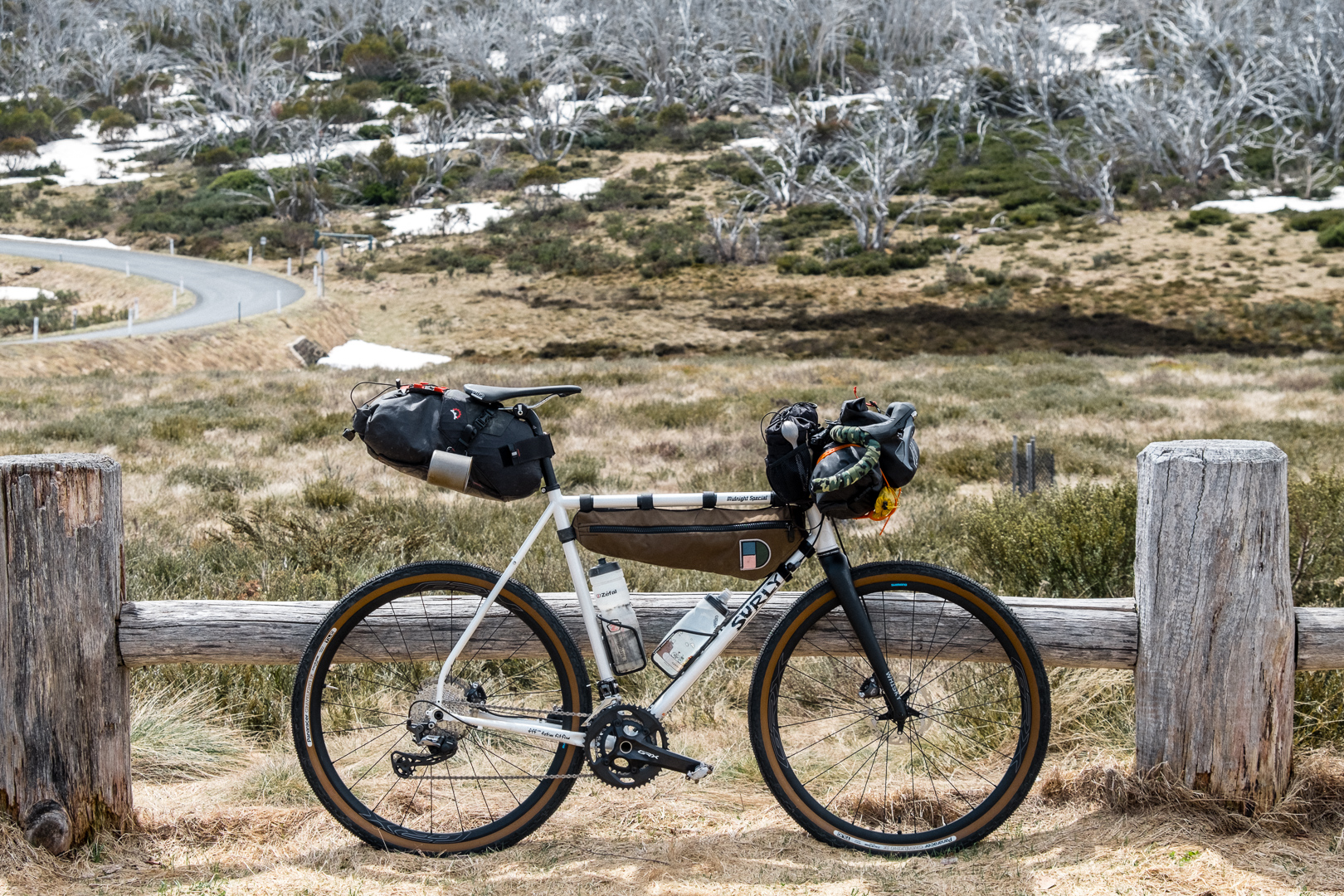 Another thing I noticed straight away was the quietness of the whole drivetrain. There was minimal chain slap and shifting was smooth under load. The 650b wheels felt super nimble on the rough stuff and allowed me to pick and change lines with ease. And when I inevitably took the wrong line the 1.9 inch Panaracer tubeless Gravel Kings really soaked up a lot of the bumps and rocks as well as giving lots of grip on the pinchy water bars that litter the tracks in the Jagungal Wilderness.

Also having hydro disc brakes made a huge difference with stopping power on a loaded bike. The flat mount GRX calipers not only look great but have a heap of modulation compared to the cable disc brakes I normally run. 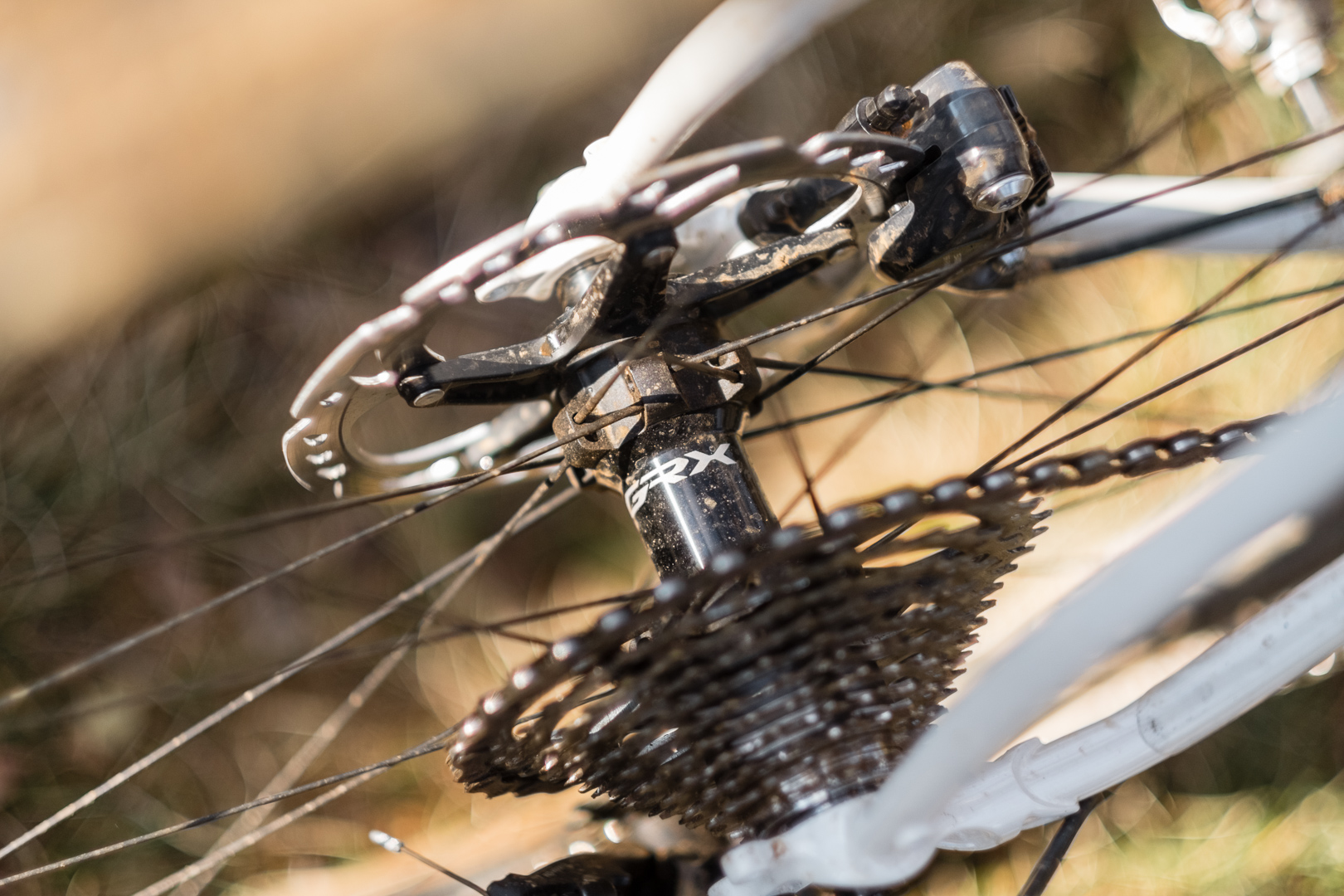 The dirty 130 ride at the Wagga Wagga gears & beers festival is about half gravel and half road, so it would be a good test for the bike and groupset. Unloaded the bike felt like a cloud, a real fast cloud. The less pinchy and more gradual gradients of the Wagga countryside really allowed me to use the whole range of gears I had at my disposal. Over the 130kms there was never a time I felt like I was spinning too much or too little. I could keep up with the roadies on the blacktop and then as soon as the gravel hit I was passing people (who’s 28c’s got pinch flats) like I was on an e-bike. 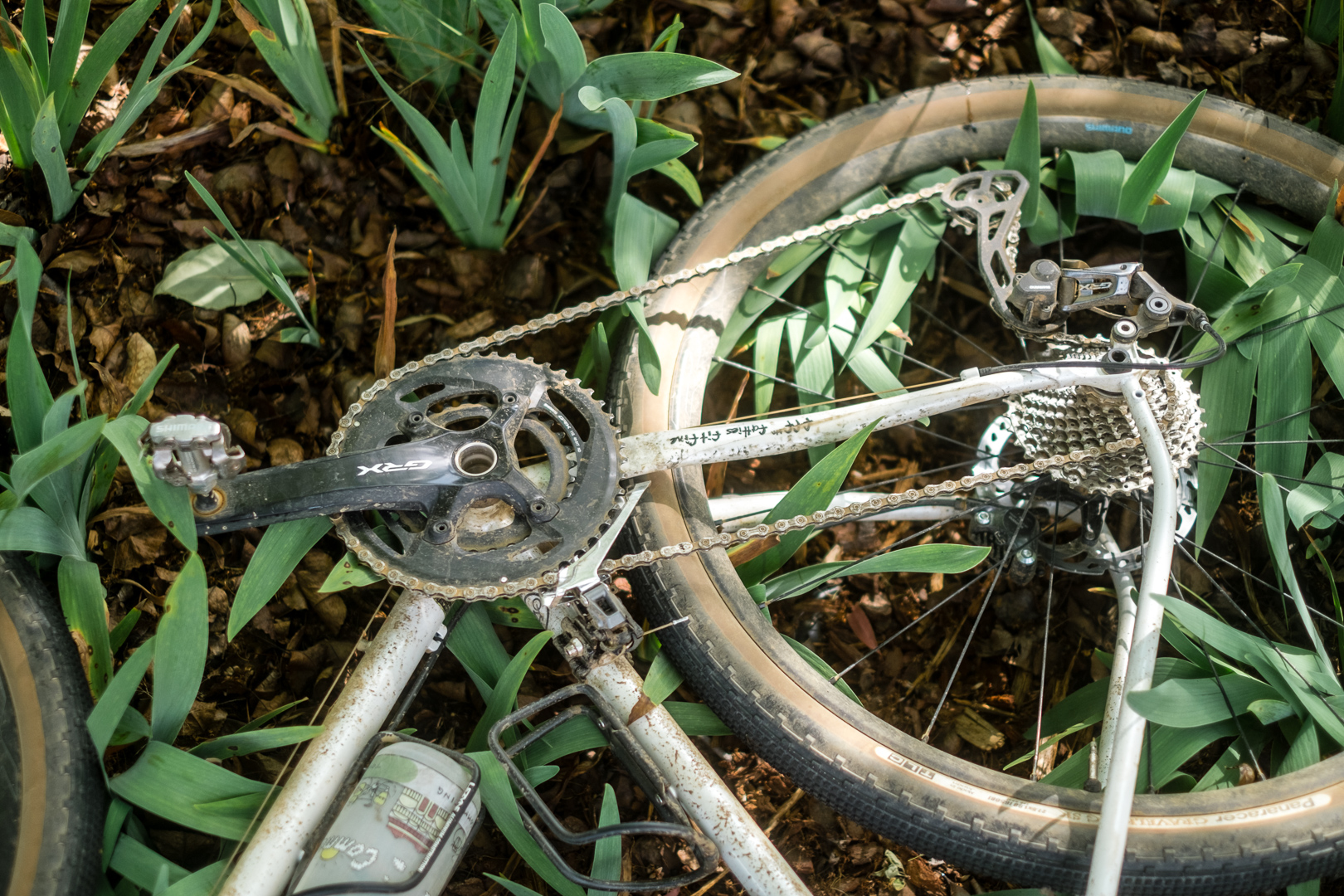 Being able to ride the same bike, setup the same way on two distinctly different rides one day apart really gave me a good insight into the GRX groupset and I reckon I’m sold. So much so I’ve ordered a set of GRX levers and a rear derailleur for my personal gravel bike.

Thanks to Commuter for the opportunity to test GRX, it was an absolute hoot.

5 thoughts on “Shimano GRX is here.”