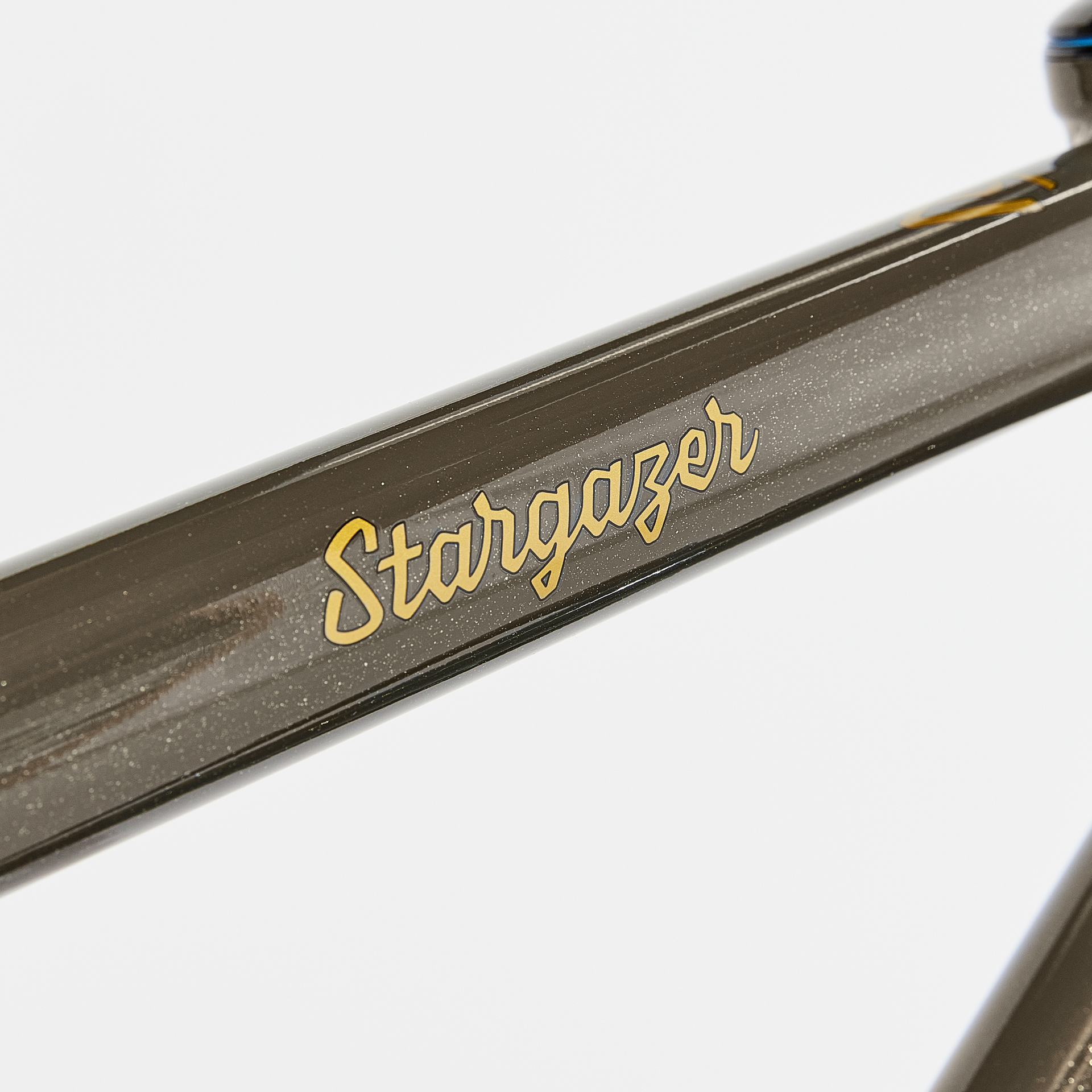 
Now here’s something we’ve been really looking forward to!

If you’ve been following us via social media the last couple of years you’d certainly have seen some of the builds we’ve created around what was Tumbleweed’s only model – the Prospector. Within our range, and industry wide, the Prospector is extremely hard to beat as an offroad tourer, especially if you’re leaning toward the remote expedition end of that spectrum. For at least the last year we’d been hearing rumours of Dan at Tumbleweed dropping a new bike and our imaginations have been going crazy. Turns out what we had in mind wasn’t too far from the final result and, on paper at least, we are LOVING the new Tumbleweed Stargazer.

In Tumbleweed’s words ‘the Stargazer is a nimble and balanced drop bar mountain touring bike designed for loaded trail riding. It is at home on trails, singletrack and gravel roads whether unladen or with racks and bags on an adventure.’

Visually, it is exactly the kind of thing we were expecting from Dan and the team. A bike that barely overlaps the Prospector at all, usage wise, and appeals to people for whom the Prospector is likely overkill. At Commuter the first thing we’d generally suggest you shop for in a bike is versatility and the Stargazer offers that by the bucket load. You’d be correct in thinking that it looks a lot like a couple of other bikes in our range, namely the Salsa Fargo and the Kona Sutra ULTD, but there are some solid differences worth noting. Let’s have a look.

The first thing worth mentioning is that (unlike the Salsa Fargo) the Stargazer geometry is not ‘suspension corrected.’ Only about 5% of our Fargo builds ever end up with suspension forks and we’re actually stoked to see Tumbleweed running a much shorter fork on this bike. Firstly it means that on all sizes the front triangle size is maximised allowing ever smalller riders to get a good amount of framebag space for gear. We often find on Fargos, again on the smaller sizes, it’s not easy to get the handlebars down low enough for comfy all day riding. Removing the ability to run suspension and reducing the front end height likely means that fit on all sizes, but especially the smaller ones, is going to be super sharp.

We feel like with the Stargazer, Tumbleweed could MAYBE have gone a little more generous with tyre clearance for those that wanna run big wheels but, really, that’s us being kind of fussy. Tumbleweed state that the Stargazer can take 29x.2.5 which is a little bigger than the Sutra ULTD but a fair bit smaller than a Fargo. You can guarantee we’ll be trying to squeeze a Vittoria Mezcal 29×2.6 in there the minute one of them shows up though! If you’re little, or you’re like me and you dig little wheels with big rubber, the ‘Gazer will also handle 27.5×3.0 no worries.

Given the borderline Rohloff-only nature of the Prospector we’re a little surprised to see that the Stargazer has no allowances for Rohloff setup but can 100% see Tumbleweed’s justification for this. We do facilitate it sometimes but generally we’re not huge fans at Commuter of running Rohloff hubs with dropbars. Given the Stargazers positioning as a versatile and nimble option we’re not mad about the inability to run a Rohloff. There’s always Fargo if you really want to do that.

We’re super excited to see these in the flesh, hopefully sometime just before Christmas. The folks over at Bikepacking.com have been able to spend some time on the Stargazer and only really had good things to say. There’s also some very in depth comparisons to the Fargo and Sutra ULTD as well as a tonne of options for speccing a build of your own. You can read about it here.

We’ve secured a full size run of the Stargazer in both colours and they should be somewhere around the mid $2000s once they land although I’ll update this as soon as we have that locked in. Stay tuned for more as we get closer and, as always, feel free to get in touch if you have any questions, no matter how minor.

4 thoughts on “Introducing the Tumbleweed Stargazer”