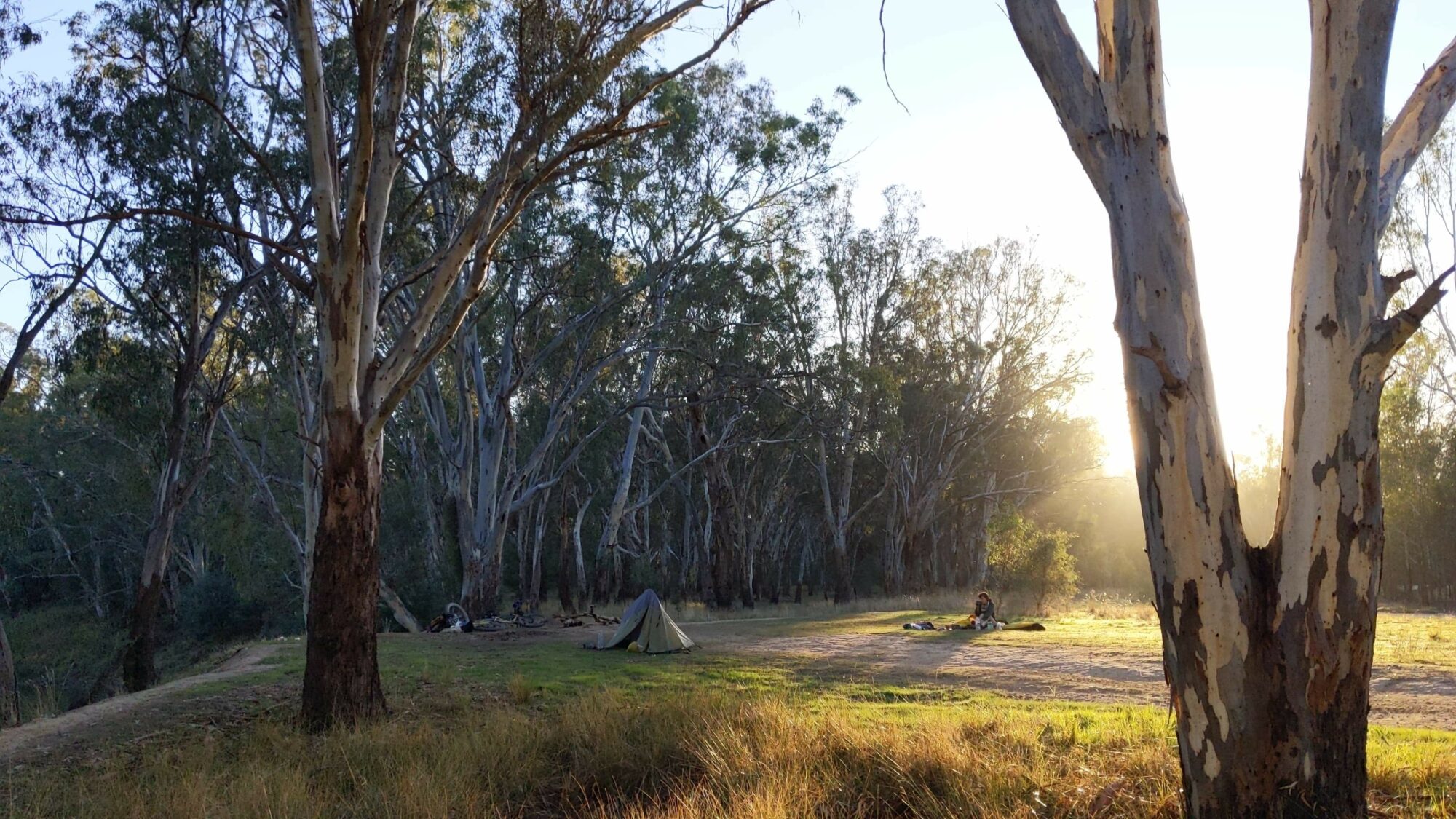 I have a habit of winging Easter trips. Something about the freedom of five days off, and the abundance of amazing routes across Victoria, I often find myself paralysed by choice. A day or two before Easter, my friend Heath and I had a bright idea. We decided to turn our backs on every one of Victoria’s amazing established routes, and poke around somewhere neither of us had ever been before. Heath volunteered to build a route and I just had one criterion: I wanted to be able to swim. So on the first morning, with hearts full and expectations blissfully blank, we jumped on a train and Hurried to the Murray.

Day one: Shepparton to Cobram East

The first day, I must say, can be regarded as something of a commute. It’s 80km from Shepparton to the camp spot near Cobram, with most of it on long, straight gravel roads, so you can really fly. But this day was far from boring; It’s one we’ll likely never forget. There was one short section of really beautiful creekside riding, to the sound of some lovely white-winged choughs. Unfortunately, that trail led us to a flock of sheep, which we had unwittingly herded directly onto the narrow road we needed to ride. Following the sheep along, trying to slowly get around them, we ventured further and further onto what turned out to be a ‘private’ farm road. At the next intersection, we knew something had gone awry, and we needed to lift our bikes over a number of fences to get through. On seeing that the detour would be an extremely long way around, and since we had finally passed the flock, we continued, sheepishly, on the route that our garmins assured us was public. Alas, at the very last stretch, we were discovered, and as the tractor roared towards us at an alarming speed, I panicked, and it was a race. I got my bike through the final gate, and as Heath fumbled to close the latch behind us, the tractor caught us. Adrenaline pumping, I had an overwhelming instinct to ditch Heath and run. The farmer got out of his tractor looking for a fight. Heath, surprisingly, stepped in ready to engage. So against all my instincts, I rushed over to de-escalate. With time, the farmer softened, and by the end of our long chat we had received a history lesson on the local area, some route advice, and a friendly wave goodbye. We have, obviously, routed around this road in the final version of this route.

Other highlights of this day included the kind folks at Katandra who opened the shop after closing to sell us a cold drink, and gifted us two pana cottas and two salads, riding past orchards during one of the most stunning sunsets I’ve ever experienced, and rolling into the campsite at night to the racket of many cockatoos.

Day 2: Cobram East to somewhere along the Murray (campsites are plentiful) 71km

The next day involved a lot of winding in and out of double-track along the Murray, passing the many, many campers along this vast stretch of river. Be warned, there is one section just by Boomangong Beach, where you may need to take your shoes off and wade across a small creek. If you don’t want to do this you can detour, earlier, onto the Goulburn Valley Highway at km 101. With lockdown fresh on our minds, it was a rare treat to cross the border bridge over to Tocumwal for lunch, which had us singing the town’s name to the tune of Kokomo all afternoon. A bikepacking anthem if ever there was one; We got there fast, and took it slow, playing a game of ‘guess the chippy’ while lounging in the grass. Eventually Heath cracked the whip and got us back on our path along the Murray, where we once again caved and ditched the bikes in favour of a swim in a particularly lovely-looking section of the river. Despite the crowds of people we passed that day, we managed to find a beautifully quiet riverside spot for the night.

Day 3: Continuing along the Murray, past Barmah, to McCoy’s Bridge, 107km

This day was by far my favourite of the route. River road, which follows the Murray is in primo condition, and a little more shaded than the previous days. Eventually we turned onto Sand Ridge Track, past a sign that told us that we were entering the Yorta Yorta cultural landscape. Here, the pink sands and white tree trunks really made an impression, its like nothing I’d ever seen before, and we were also greeted by a family of emus! We marvelled at some glorious old river red gums, stopped briefly at Barmah Lakes, and then headed into the Barmah township for some hot chippies and gravy. From there, we sadly parted with the Murray, and headed South to where we’d meet the Goulburn River at the end of our day. Along the way, we passed by some deeply incised river valleys with barely a trickle running through them. We stopped almost immediately after crossing McCoy’s Bridge and set up camp for the night on a bend of the river. Here, we took a dip, made some tacos, watched the sunset, and settled in for some star-gazing, an activitiy that had become our nightly ritual on this trip.

The final day of our trip was lovely. Only 52 km long, we really took our time, stopping to admire some of the interesting river infrastructure along the way. It was here that we met the only other cyclists of the whole trip, who told us that they were following the newly published Yellowbelly route, which I am very excited to go back and have a look at. As we approached Shepparton, we decided it would be only fitting to finish our route with one final swim. We poked around a few places, trying to find the sweet spot of clear access with a little bit of shade. When we found it, I waded out to the middle of the river for what was one of the best swims of my life.

Overall, I thoroughly recommend this route, and give a whole-hearted kudos to Heath who put it together despite never having visited any of these places before. For more route inspiration, keep your eyes on this blog, or pop into Commuter at any time to chat with our enthusiastic and knowledgeable staff.