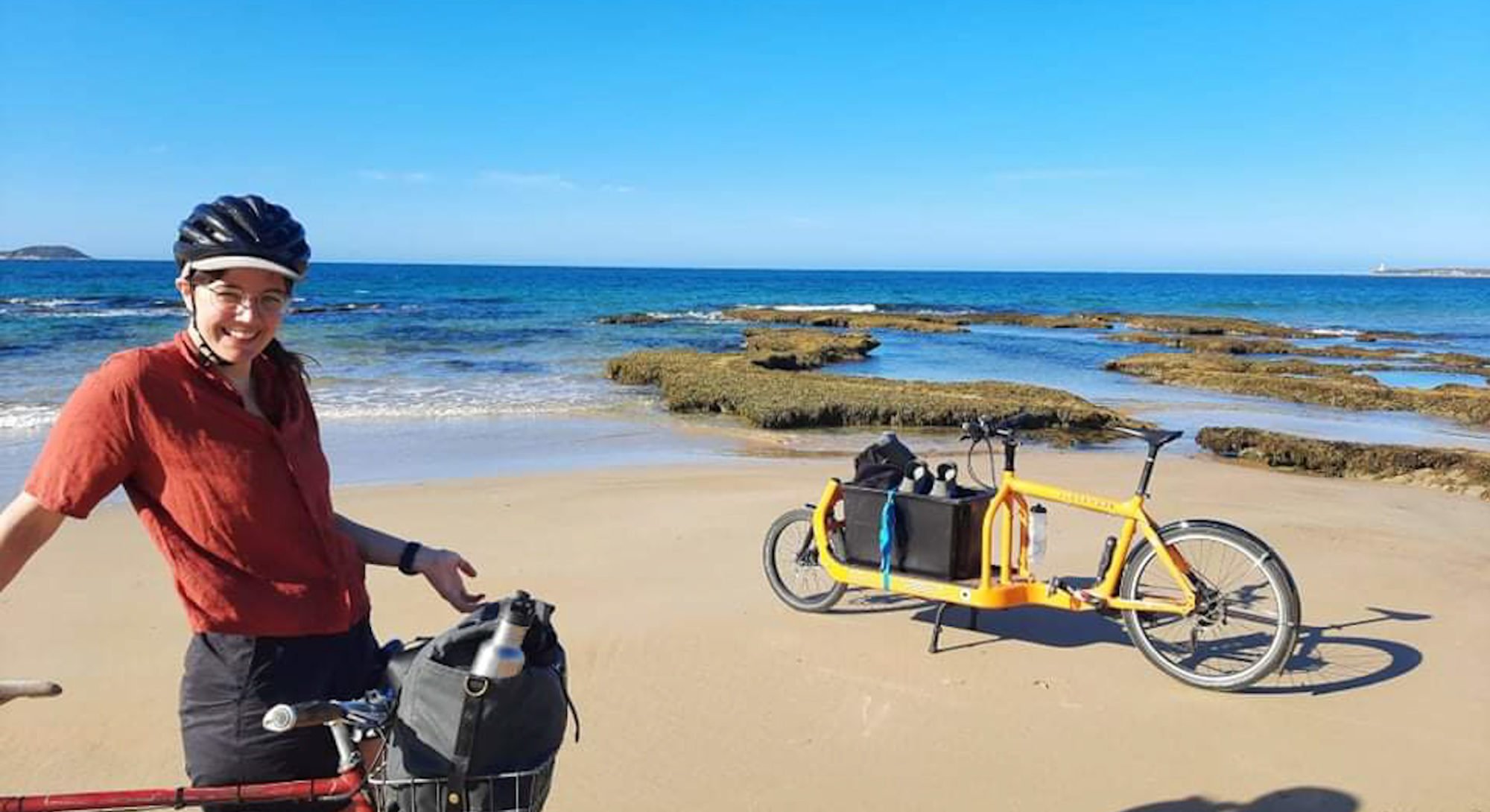 
Folks, here it is! The post that you didn’t know you needed: it’s the Commuter Cycles official guide to snorkpacking. What’s snorkpacking, you ask? It’s bikepacking, but where you pack a snorkel and make a beeline for your favourite underwater wonderland. Recently our very own Kias (@pollen_pal and @kia_is_asian) took a weekend trip down to the Mornington Peninsula, in search of some sea critters. Here’s how it went.

The sun was high and so were our spirits as we set off on a Sunday morning for the inaugural Commuter snorkpacking trip. Our hopes were soon dashed by rail replacement buses, and once past Frankston, we were starting to feel both a little hot and little worried about making it to the coast in time for an afternoon snorkel. Jumping on the Stony Point train to gain a little ground, we had the bright idea to check whether there was a connecting ferry at the other end, and made an impromptu decision to ditch the day’s plan in favour of a quick trip over to French Island, one of our favourite close-to-home adventure destinations. Our ‘fly by the seat of our pants’ approach was richly rewarded with plenty of koala sightings and in the morning, the surprise appearance of a couple of dolphins surfing in the wake of our boat.

Setting off for Flinders pier in the morning, we took a few wrong turns and failed shortcuts, and we learned the hard way that the 100km/h Frankson-Flinders road does not make for fun riding. So at Flinders pier, we consulted Strava heatmaps and opted for the longer route home, taking us up and over Red Hill. After taking many dead-end ‘short cuts’ we were a little worried about trusting the heatmap that took us over Punty Lane (marked as a no-through road in real life) but we were pleased to be greeted with sweeping views of Bass Strait and a small, lovely section of the customary hike-a-bike. Surely one of the nicest ‘roads’ on the Peninsula, I’m glad we took a punt on it!

But bikepacking is not what you came for, let’s get into the good stuff! Snorkelling under Flinders Pier on a good day, you can see many treasures, including the Victoria’s marine faunal emblem, the weedy sea dragon. While looking for these little cuties, keep your eyes peeled, because there are monsters under the pier too! Huge smooth stingrays, with a wingspan of over 2.1 metres and a length of 4 metres. It’s an encounter that is sure to thrill even the most seasoned of snorkellers!

Other spots around Melbourne that we highly recommend are the Jawbone Marine Sanctuary at Williamstown, where you are certain to see fiddler rays, stingarees and the occasional Port Jackson shark. If you take it slow, you might see some spectacularly coloured nudibranchs. On the other side of the bay, Rickett’s Point is a snorkeller’s paradise. There, you might see some pot-bellied seahorses, charming leatherjackets, salmon and the usual stingray suspects. Further afield, on the Mornington Peninsula, Flinders Pier and the nearby Mushroom Reef are the hot spots, as is Blairgowrie pier, which is famous for the annual migration of the spider crabs, who come to the area en masse to moult, and whose soft shells attract hungry rays looking for a snack. It really is a sight! If you feel like taking a visit to the less-well-known of the Peninsulas, there are plenty of treasures on the Bellarine. My top pick is the rock platform right by the Point Lonsdale pier, where I recently found myself snorkelling among a large school of yellow-eye mullet. Depending on wind conditions, either the Queenscliff Pier or the more sheltered Swan Bay are great options, as is the Ozone Wreck at Indented Head.

So what should you pack on a snorkpacking trip? Whatever you’d take on a standard bikepacking trip, plus your snorkelling staples:

My fins fit perfectly wedged across the outer flap of my Wizard Works mini shazam, and I also use fork bags to take up some of the slack of the extra gear, but feel free to get creative with your packing! Don’t forget a pocket-sized lock for peace of mind while you’re making fishy friends.

For all snorkpacking enquiries, or for support in making your own silly ideas come to life, drop in and have a chat with us at any time.

2 thoughts on “Snork-Packing : The Official Guide”