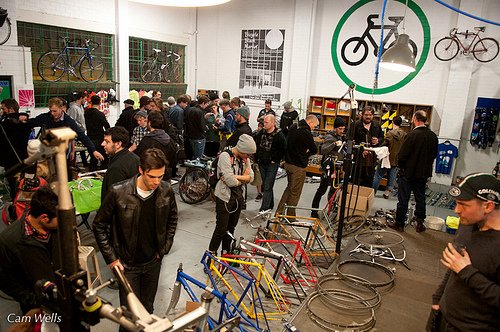 Check out the full list of events here: http://www.melbournebikefest.com.au/program

We’ll be running a couple of the events – the Treadly Awards and the (Second) Bicycle Black Market.  They’re both free and they’re both events that we’ve previously held here at Commuter Cycles.  This year, all the Bikefest fun – including the Treadlies and Bicycle Black Market – will be at 1000 Pound bend (361 Little Lonsdale Street), so it’s even easier to get to, and there will be lots of other interesting bike stuff to check out before and after.

No festival is complete without an award ceremony, so for the third year running Commuter Cycles is hosting the 2010 Treadly Awards.

The event celebrates everyday cyclists and their bikes. We’re rolling out the red carpet, awarding prizes to the folks (and bikes) that stand out in the following categories:

There will be great prizes up for grabs and even if you don’t enter, plenty of fun for spectators too.  If you love your bike, and ride it to get from A to B, the Treadlies are for you!

Get your 2nd hand cycling goods away from the prying eyes of race day officials. Barter, trade or just bring cash. Featuring the rarely seen collections of five carefully selected stallholders. It’s like a swap meet, but black market sounds so much more exciting.