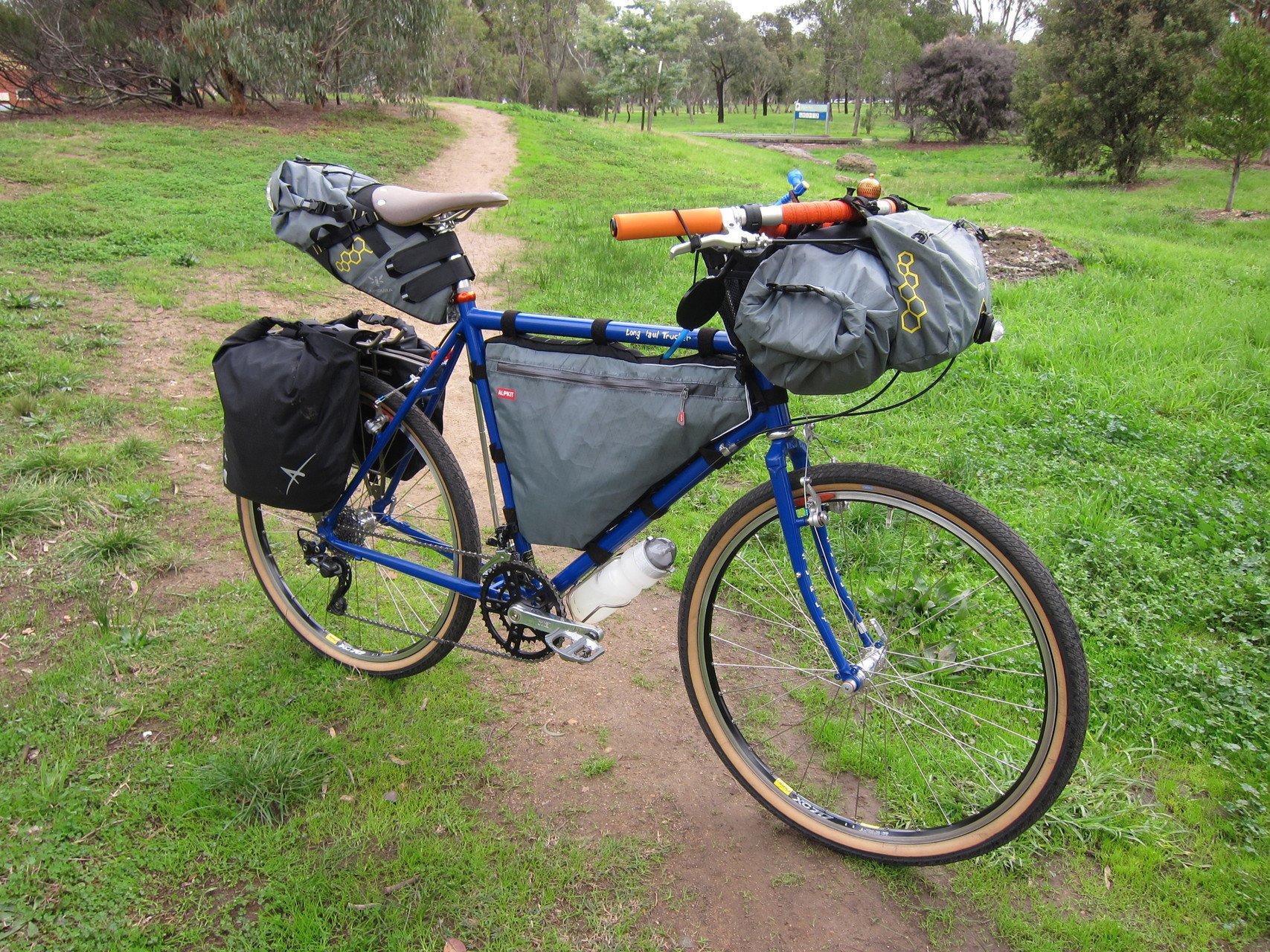 Like most of the Long Haul Truckers we build, this one was due to depart OS not long after it was finished. Unlike most LHT owners though, Belinda was planning on packing light and mostly in bikepacking-style bags. It’s a flexible set up with lots of options for carrying varying amounts of gear on day trips while on tour.

It was a tricky balancing act to keep the weight down while maintaining comfort and functionality for the long trip ahead. B chose the Jones Loop bars which are well suited to touring with their many different hand holds. The primary position is out nice and wide which lends confidence when descending or exploring back roads.

With the bars locked in, and Paul touring cantis and matching levers chosen for braking, we suggested XT shifting with a White Industries VBC (Variable Bolt Circle) crankset for shifting. As well as being a great combo of lightweight and reliable with a square taper interface, the VBC cranks allow almost any combination of two chainrings. B went for 46/30 as a super compact set up that would be quick on the flat, but still low enough for the Cols of the Pyrenees.

We’re huge fans of White Industries hubs. While on the higher end, they’re significantly cheaper than DT Swiss and Chris King, but a good match in terms of quality and reliability. They’re also quite light and feature a titanium freehub body that is more resistant to indentation than aluminium equivalents. Laced to Mavic rims with DT Competition spokes they make for a fairly light, yet very tough and reliable wheelset. As B was looking for a more spirited ride than most LHTs we suggested a pair of Compass Slumgullion Pass tyres. Tyres can really alter the ride of a bike and these definitely did. The only trade off is that they don’t have any significant puncture protection built in, but for light touring we think it’s worth the risk.

After much debate around the workshop we suggested a few highlights were in order in a bright contrasting orange. B was into it, so we sourced a seat collar, grips and tape which all fit nicely with the stock Kool Stop pads on the brakes. To top off an already awesome bike, B chose a Brooks Cambium mounted to a silver Thomson post to match the silver Loop bars.

The brief was to keep it light and this extended to carrying gear. We hooked B up with a couple of Apidura bike bags and fitted a titanium rear rack for the occasions she’d need to fit a pair of small panniers.

So how does it ride

Almost all of us had our doubts in the beginning but this bike is actually a hoot to ride. Most LHTs don’t quite feel right until they’re loaded up but this one was fun completely unladen. You know a bike is great or interesting when all of the mechanics get in line to have a go come test ride time and this one was popular for both reasons. We felt it was a great result and B emailed later with the following;

“I feel extremely lucky to have such a beautiful bike built collaboratively by all of you guys in Commuter Cycles. Particularly, I appreciate the care, interest and concern you took with the build. You showed great thoughtfulness and humour throughout and the evidence is there to be seen in the orangely tinted and sharply dressed, light haul trucker.”