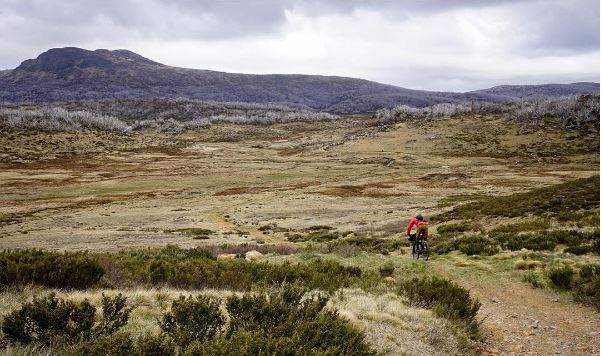 The inaugural Hunt 1000 bikepacking event kicks off this Sunday, 27th November. Participants will be taking on a 1000km personal challenge through the Snowy mountains from Canberra to Melbourne. The challenge takes on the best fire trails and backroads the Snowy’s have to offer. Everybody will be self–sufficient, bringing all their own sleeping gear, food and emergency equipment. A suggested itinerary of 7-10 days has been put forward by the organisers however, some have set themselves a challenge to finish it faster. We have many friends and customers giving it a go and would like to share a bit about their bikes and set up.

Hunt 1000 riders will roll out of Canberra this Sunday morning along the route below, you can track their progress via their GPS receivers on the map progress website. Each rider will appear on the page with their own  icon. The ‘dot watching’ phenomenon, as it has been coined, is highly addictive so save the tab in your bookmarks bar and keep refreshing your browser to keep up to date with where people are placed.

It’s no secret we have been into this kind of bike travel for sometime now. There is something very appealing about the self sufficiency it brings and the ever present need to keep moving and reach your next re-fuelling stop. We are really happy to see many friends and customers take on the challenge. Here’s a look at who they they are and what they will be riding:

Gareth is no stranger to long rides in the countryside! We helped him get his Curve Uprock bike prepped for the Tour Divide last year. After the single speed worlds in Woodend last month, Gareth did hint at giving it a crack on his singlespeed Soma Juice, so we will have to see what he rocks up to the start line on!

Tom called into the shop on Tuesday this week and informed us he had a few extra days off work so had decided to catch the train to Bairnsdale and ride up to the start in Canberra via the Barry Way. That’s a tough route through the mountains and the climb to Jindabyne will be a good warm up for the mountains he will face next week!

Tom will be riding a sweet new Crust 650+ with a DT wheelset that we recently built for him.

Lewis runs Momentum messengers, delivering bulky items around inner Melbourne via cargo bike. His lazy 500km per week for work and his healthy eating put him the superhuman league of humans so don’t be surprised if he’s back in Melbourne to deliver a few more packages before the following weekend!

Lewis will be riding his Moth Attack. He’ll also be rollong on a wheelset we built. It’s a pair of rock-solid DT Swiss hubs laced to nice, wide Stans Flow rims.

Dave is a long time customer with a long history of mountain bike racing. Dave recently did the Tour Aotearoa, a similar event spanning 3000km across all of New Zealand. Dave will do well through his experience and meticulous approach to planning. Dave will be riding his Titanium Lynsky 29er.

We put together an awesome custom Velo Orange Piolet  for Jody last year and he’s taken it on many adventures since. This event is a reward for him after a long semester completing his master’s thesis.

Occasional weekender fill-in at Commuter cycles, Mik is rarely not signing up for long winded rides in the bush. This year he has already traversed Victoria’s desert parks and New Zealand (twice). He has a slow and steady approach to these long ride which see’s him pick off the hare’s who sprint off at the start and this usually ends with him up front at the top of every hill climb.

Mik will be riding his heavily-tinkered-with Rawland Drakkar 29er.

When John isn’t vying for father of the year awards,  he loves long slow walks in the bush with his bicycle, lucky for John there is the promise of Hike’a bike on the route so he won’t be left disappointed!

John will be riding a Yeti carbon 29er hardtail

Good luck to all the guys and girls having a go at this fantastic event, if you want to read a bit more on all of those lining up for the grand depart Hunt bikes have a bit more info on their website.

In other bikepacking news, a friend of the shop, Lavanya Pant has just received the first Laels globe of adventure bikepacking scholarship to ride the Baja divide this coming February. she and her Partner Al took off last year to ride across Europe and it seems the travel bug has bitten hard. We are super excited for her and also stoked that such a scholarship has been realised!

Happy trails and bring on the summer of bikepacking!