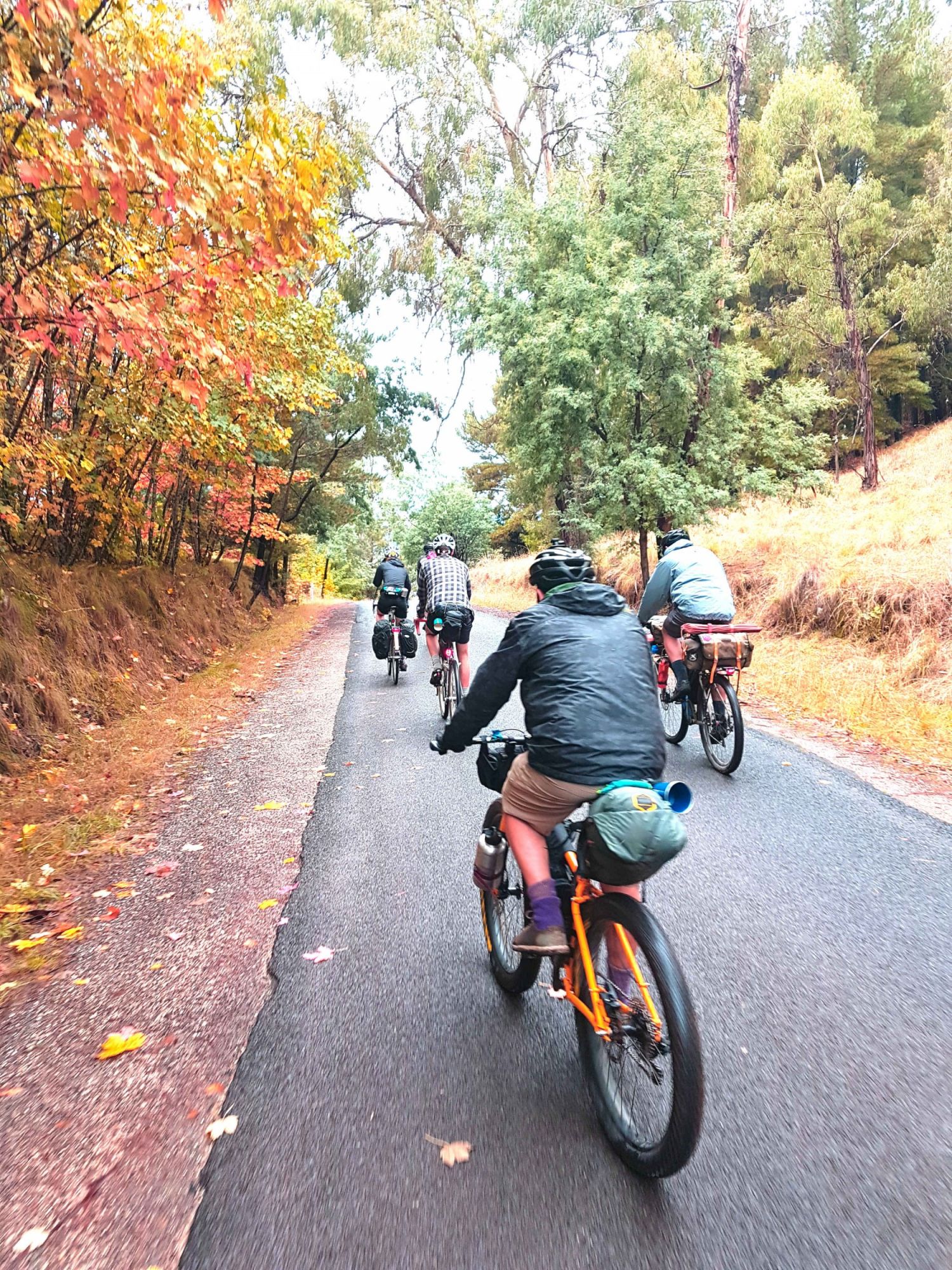 Our friend and talented wordsmith Pepper Cook has dropped a few musings about our latest installment of Commuter campout:

Single Track. Whiskey. Leaping Frogs. Prairie Breakers. Large bearded men and one lady in flannos riding bikes adorned with front baskets, complete with decorative foliage. These are just a few items to be found in the wild on any given Commuter Cycles Campout.

I was one of the lucky attendees to the three day Commuter Campout 2.0 a couple of weekends ago  and I’m here to tell you about the rowdy time we had. This particular campout was arranged and planned meticulously by the legendary Will Hartnett of Commuter Cycles. Will used to be a tour guide so he’s pretty knowledgeable when it comes to route planning and whiskey rationing. He also has a good grip on bike mechanics which happened to come in handy as we proceeded to break our bikes all weekend on the more imaginative sections of his route…

The route itself was a 3 day trip: 65 km on the first day, 60km on the second, and finishing up with a 55 km ride ending at the Castlemaine station. We were advised that the terrain would be 70% gravel and fire roads, 18% sealed road and 2% single track. Most of the riders came equipped with some sort of rigid hard tail contraption including a couple of beefy Surlys, a Soma Wolverine, a couple of  kooky mashups and a vintage Prairie Breaker. Everyone had done their utmost to make sure they had every camping necessity, and packing choices included pannier bags, Wald baskets, and a variety of bikepacking bags.

Fresh off the morning train from Melbourne all eight of us met up at the starting point,  Sunbury Station. Day 1 was a 65 km roll from the train station to O’Briens Crossing campground in Lerderderg State Park. We mounted our steel ponies and weren’t quite able to clear the first speed hump in the train station carpark before one of our riders’ very stylish canvas saddle bag decided to go for a ride of its own. After a few swear words and zip ties everything was secure and we made it the rest of the way to Gisborne for lunch on a healthy blend of gravel and tarmac.

After a variety of fried goods and 6-pack purchases we saddled up once more to beat the heavy grey clouds encroaching on our perfect campsite-selecting abilities. We sped along some nicely wooded sand and gravel backroads and made a fast descent into the O’Briens Crossing camp area. We all pitched our tents and dragged out all necessary gear (except our mugs which had all been dutifully strapped to the outside of our bags) to cook a range of noodly goods. Will broke out a flask of whiskey which had thoughtfully been provided by Huw, the owner of Commuter and we commenced to drink and be merry until late into the evening……..we made it to about 9pm.

We woke up the next morning to fully soaked bikes and tents and as we waited for the sun to rise over the trees Will made us each a magical flapjack under the kitchen tarp he had set up. Afterwards as we finished packing up he entertained us with expert creek crossing antics. We then rolled out of the campsite leaving no trace as always and climbed up out of O’Briens crossing onto the Byers Backtrack into Blackwood. 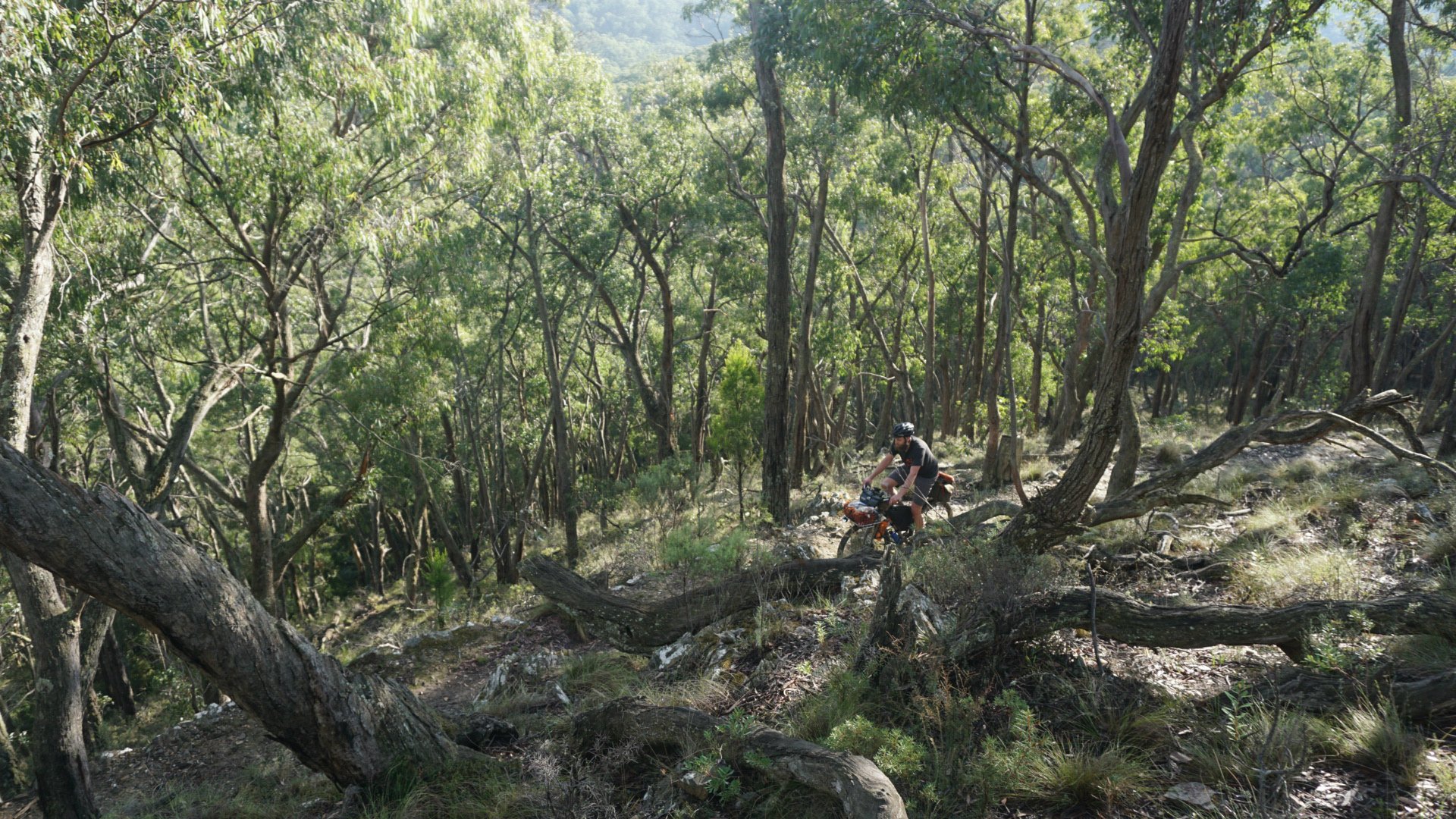 This was by far my favourite section of the whole route as it was very exciting to ride, especially on a cross/touring bike with panniers. The backtrack was very skinny and 8 km long and included several exposed cliff sections which meant that if you knocked a pannier on the left side wall you could easily end up ricocheting off the cliff on the right side. There was even one section through cliff walls that was so tight several of us had to unload our panniers to squeeze through. Near the end Will showed us a narrow winding cave that we were able to walk pretty far back into.

We resupplied in Trentham where I bought a radical pack of striped novelty socks (3 for $5!) and then we continued up to the campground at Mount Franklin for the night. The total for the day was 60 km and there were several casualties on the Byers track and a trail section afterwards including one Prairie Breaker off the cliff (luckily caught by a tree halfway down, rider included), one Titanium camping mug crushed, which is sort of a hazard of stylishly clipping it to the outside of your bags, and one derailleur into a back wheel which Will was skillfully and luckily able to mend for the rider.

As soon as we had erected our tents at Mount Franklin the rain came, but Will had once again whipped out his guiding skills and set us up an epic camp kitchen underneath his tarp so we were able to cook up nice and dry. The campsite was on a nice hill underneath some truly massive pine trees with a soft needle carpet underneath. As we were cooking we were invaded by Victorian Banjo frogs which proved to be entertaining later as they enjoy leaping into the sides of your tent. Our site stayed pretty dry compared to the previous night as the majestic pines provided excellent cover and the pine needles had solid drainage underneath. 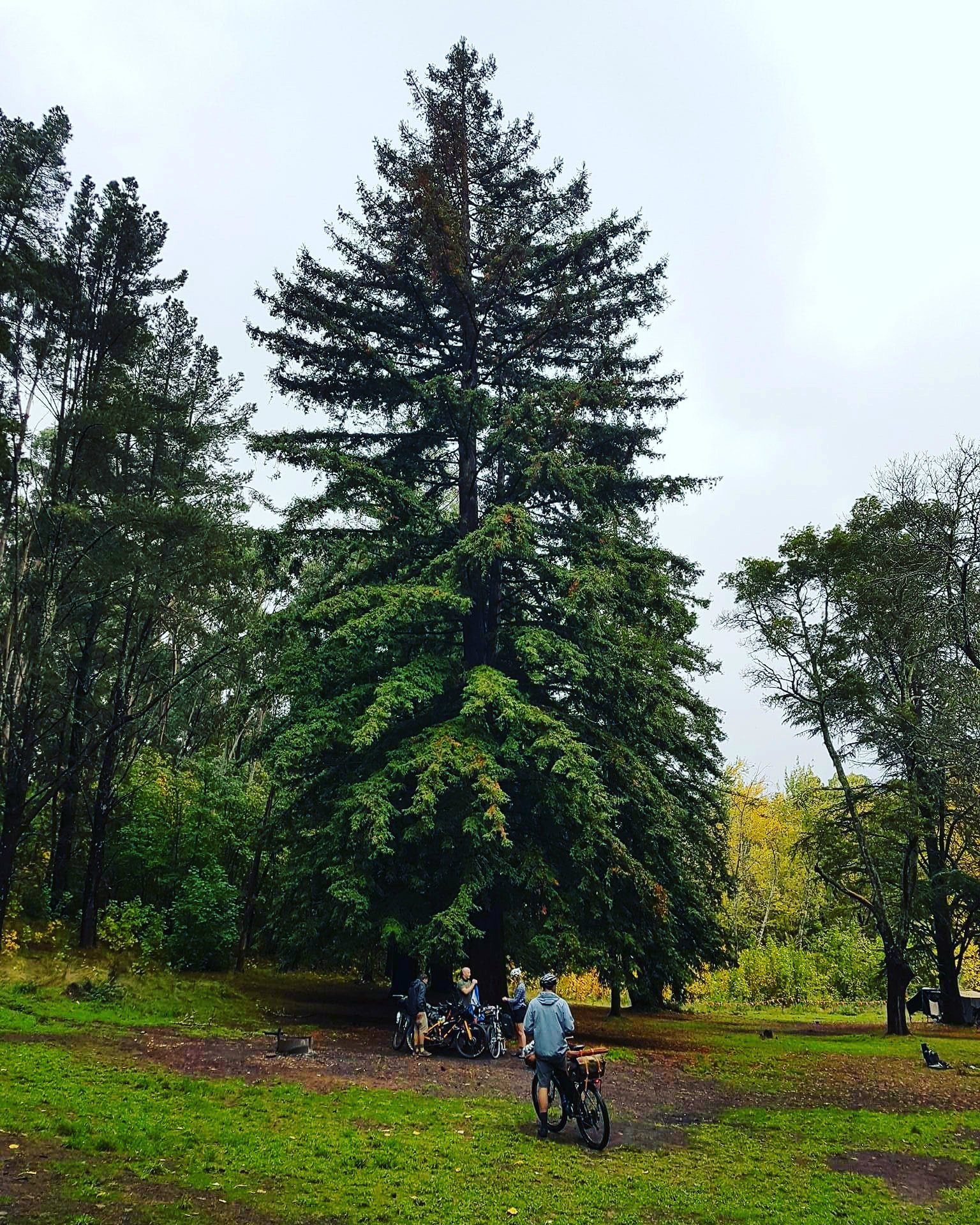 The next day we rode a rollercoaster of gravel and fire roads out towards Castlemaine. The route was twisting and had many solid ups and downs, and on one massive climb we all got a good running start to try and make it about half way up. Will was able to put unprecedented power down onto his steed resulting in a cracked free body. 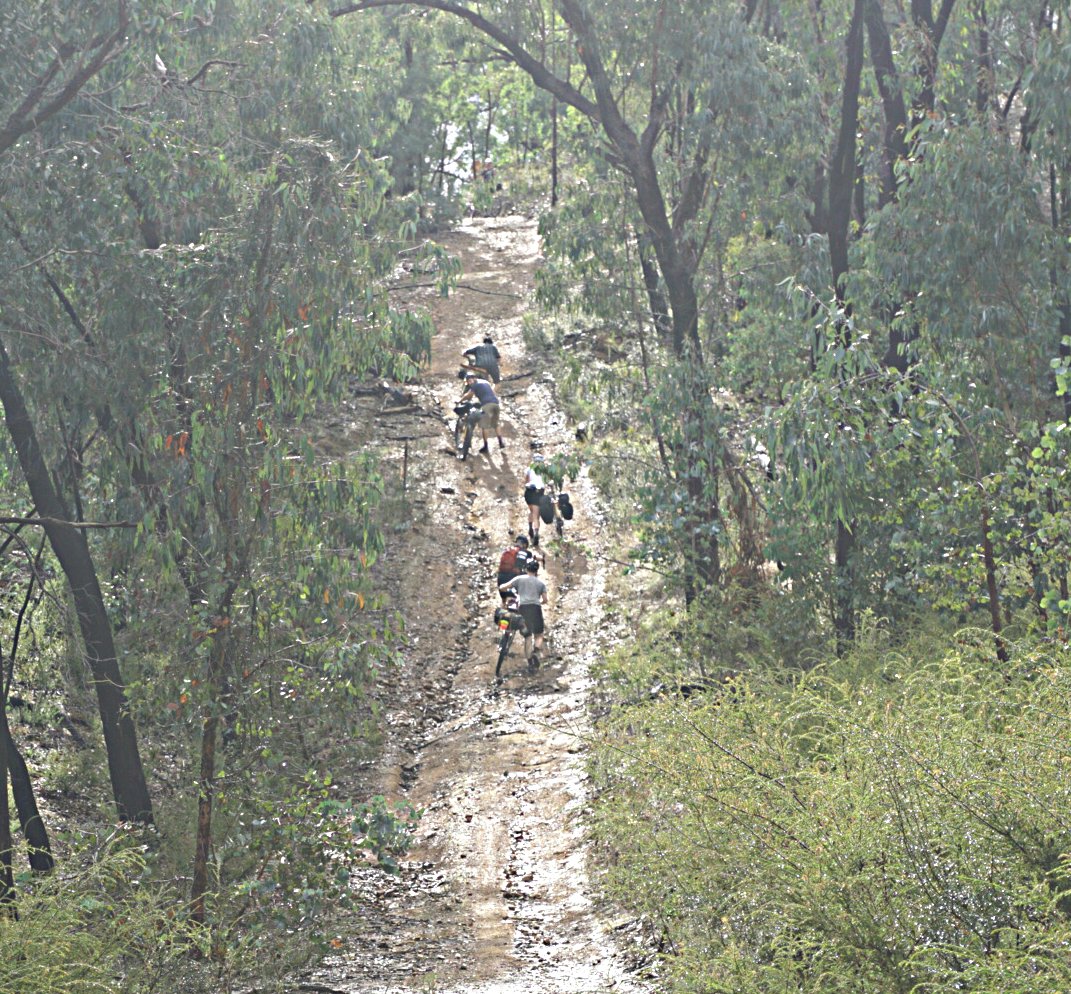 After close examination at the top of the hill Will declared his bike still rideable as long as he didn’t stop pedaling for the rest of the trip. Channeling his cool fixie kid days he was able to ride the last 30 km to Castlemaine and only threw his chain about ten times. Whiskey and fruit-flavoured gummy snakes kept us all spinning and smiling. We finished up with a pub lunch and headed back to catch the afternoon train home in two bunches as V Line still hasn’t figured out the whole bicycle thing. Already looking forward to Commuter Campout 3.0!

If you have a few days to spare here’s the route: