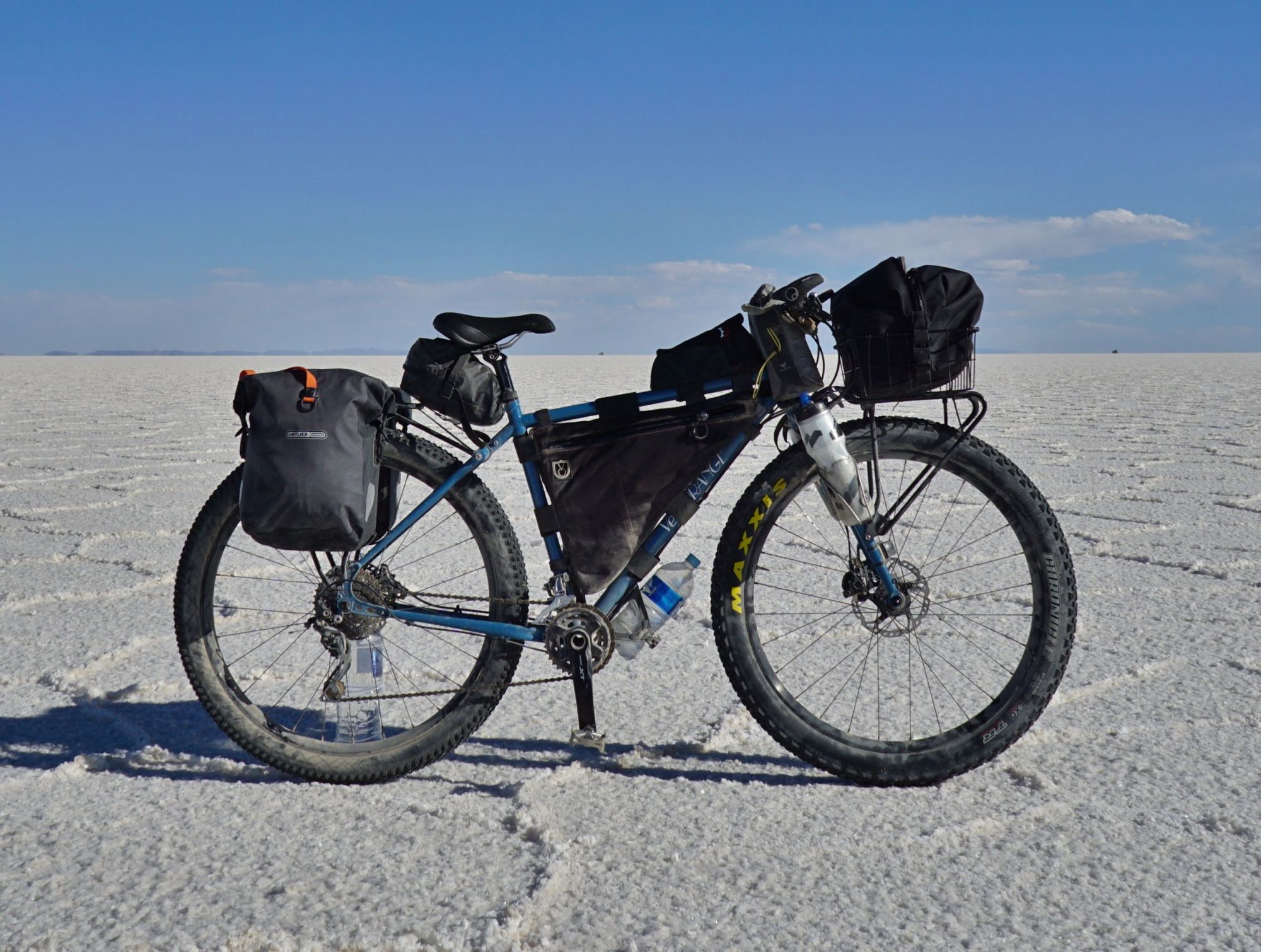 I’m back in the shop after a month in Bolivia. My partner and I fitted about 12 days of riding bikes into our holiday. Here’s a bit of a list of the gear we took and how we set our bikes up for some high plains drifting.

A few years ago this bike somewhat reset the boundaries of where you could go bike touring. Sure people had been pushing their heavily loaded 26 inch touring bikes across deserts, rivers and mountains for decades, but the 29+ tyres on the ECR allowed me to keep riding when the tracks turned to sand or in some cases disappeared altogether. 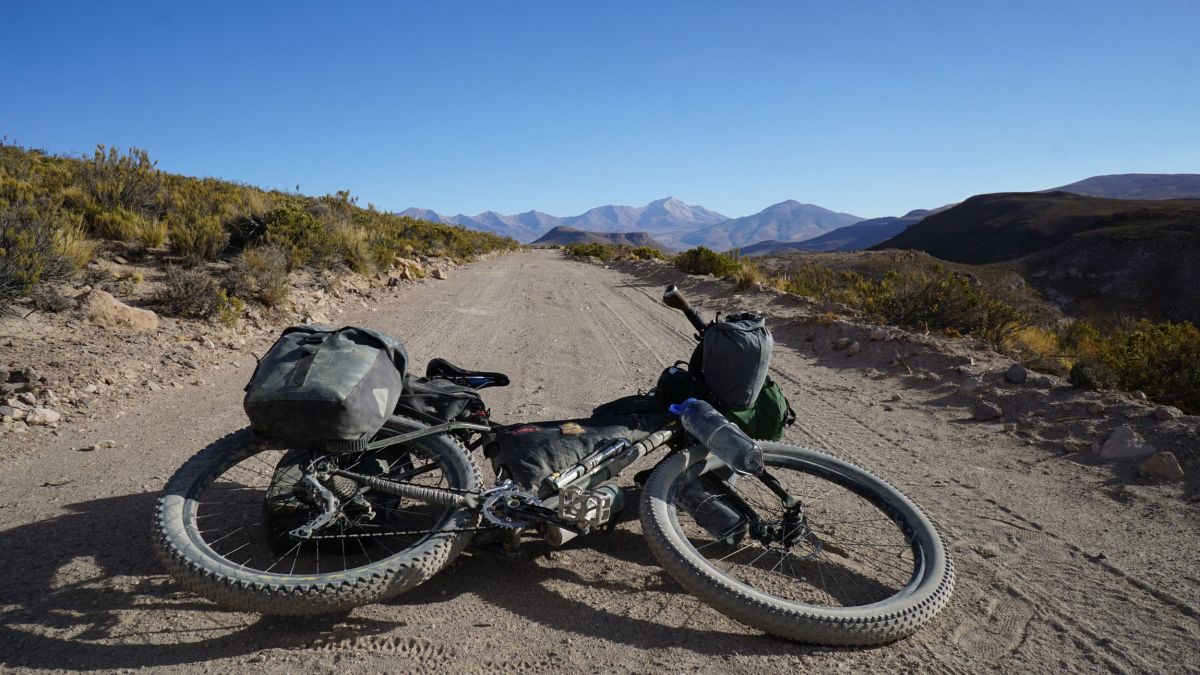 This bike has seen well over 20,000km of off road touring and MTB adventures now and as a result has seen many configurations. Prior to the trip I had been running Shimano SLX 1×11 speed. I decided some lower gears might be good given the altitude, so switched to 2 chainrings on the front. The 26/36 up front with a 11-42t cassette was a life saver. Climbing 12% grades at 4000m meant a lot of time was spent in the 26t front cog! 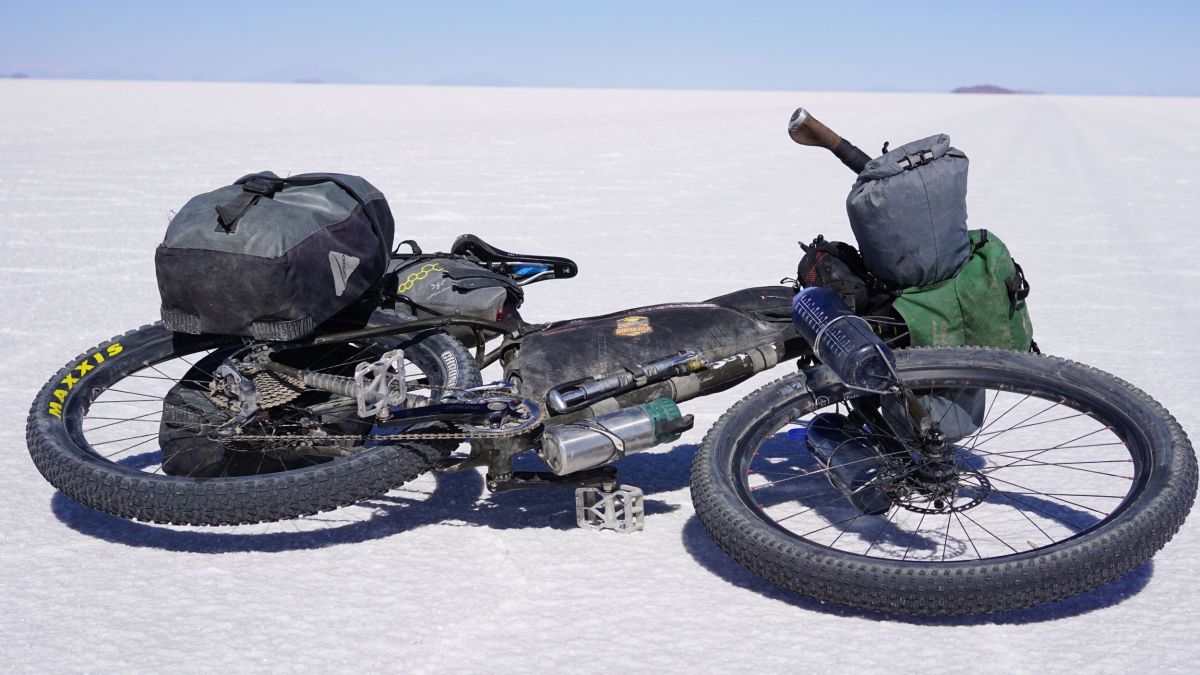 Frame bags, saddle bags and accessory pockets were a mix of Apidura and Revelate – all of which have seen extensive use and are still going strong. My ten year old panniers were held on by a Tubus Vega 29 rack. 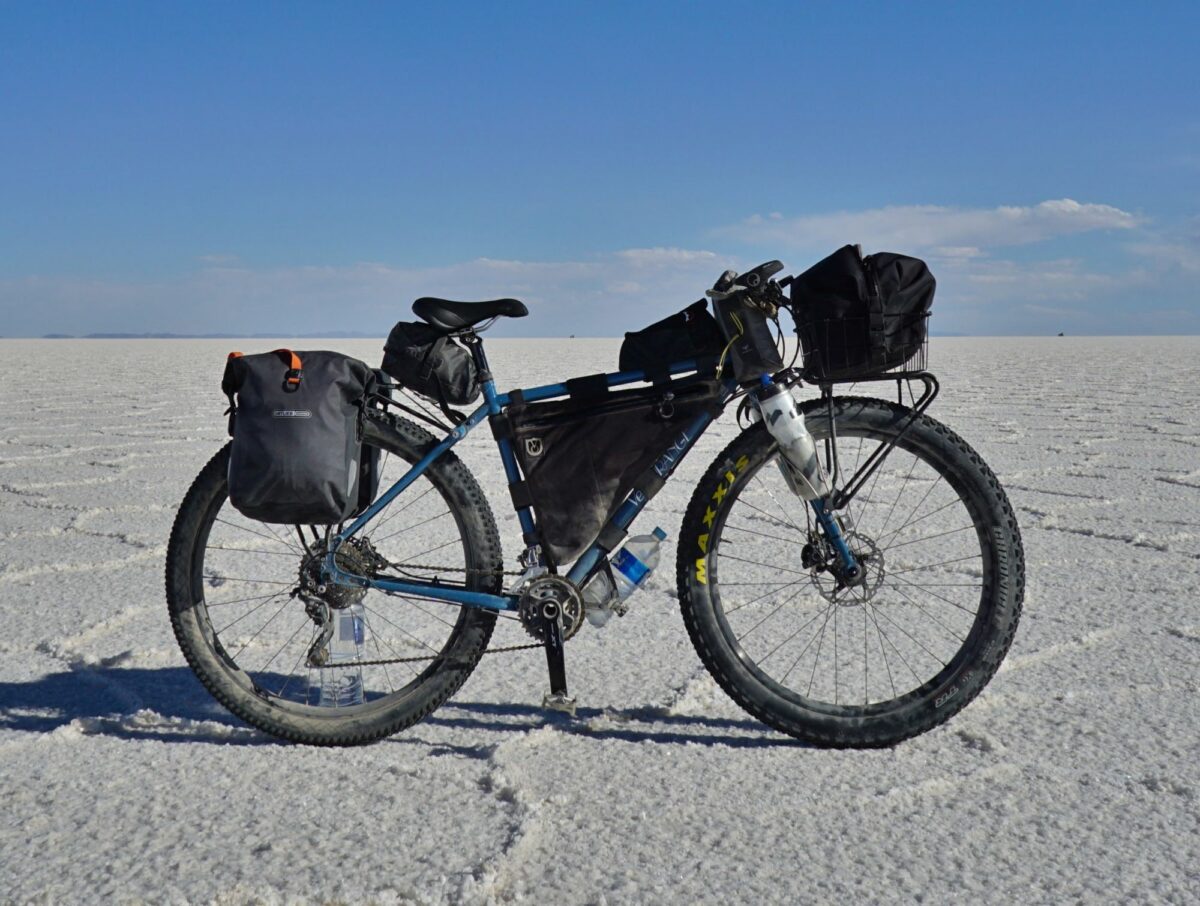 Sophie’s Piolet spends most of its time with another wheelset sporting 700x44c Bruce Gordon Rock n’ roads. The big 650+ wheels make an appearance when we are heading off the beaten track. Again this bike got geared down with a 24/34 crank and 11-36 ten speed on the back. Lots of Velo Orange parts adorn this bike, such as stem, seatpost, headset and front bag. The front bag is great, fits in the Wald 137 basket and has a handy shoulder strap for carrying off the bike. The nifty Delta elasto-net helped too. King cages held the water bottles to the forks and the Ortlieb gravel panniers aided with extra gear and food storage needed in this remote part of the world. Velo Orange are working on a tweaked version of this bike due for release early next year, I can’t wait to see it!

The EZY system allows removal of the pedals in five seconds. This was really handy as we ended up catching a few buses, so made throwing it in bus storage compartments and roofs really EZY 😉 Whether you get the standard pedal or the EZY system you won’t be disappointed, the bearings are AMAZING! 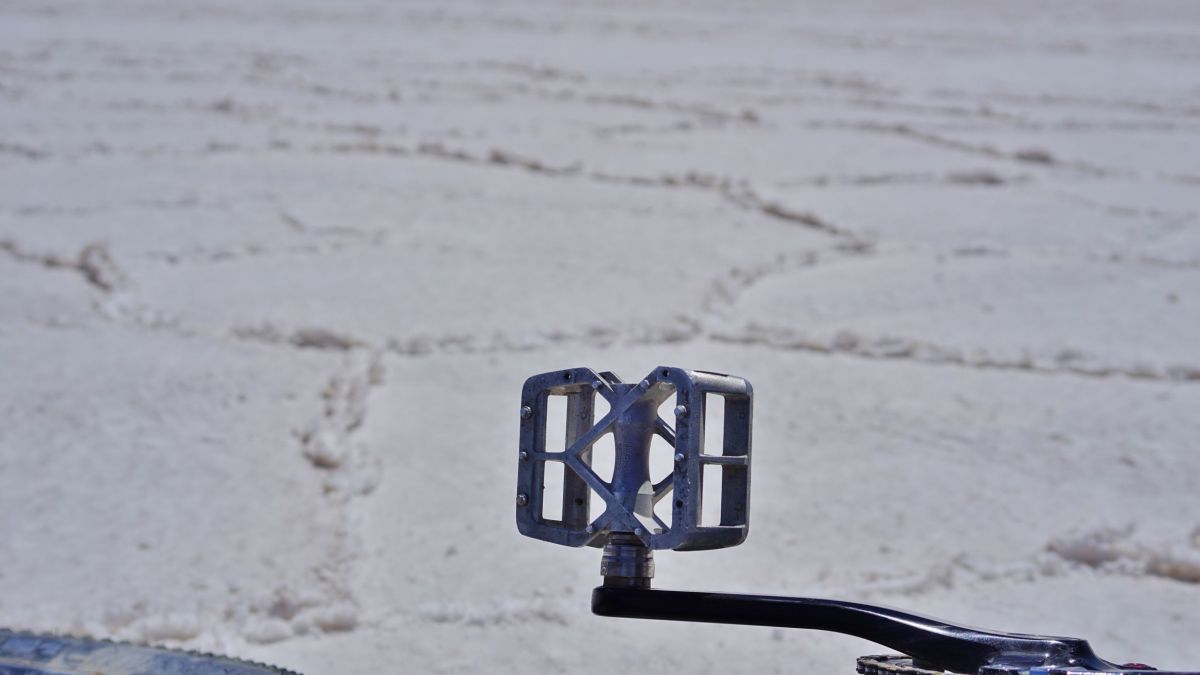 For navigation we mainly used the Maps.me app on our phones and the back up of my Garmin Oregon. 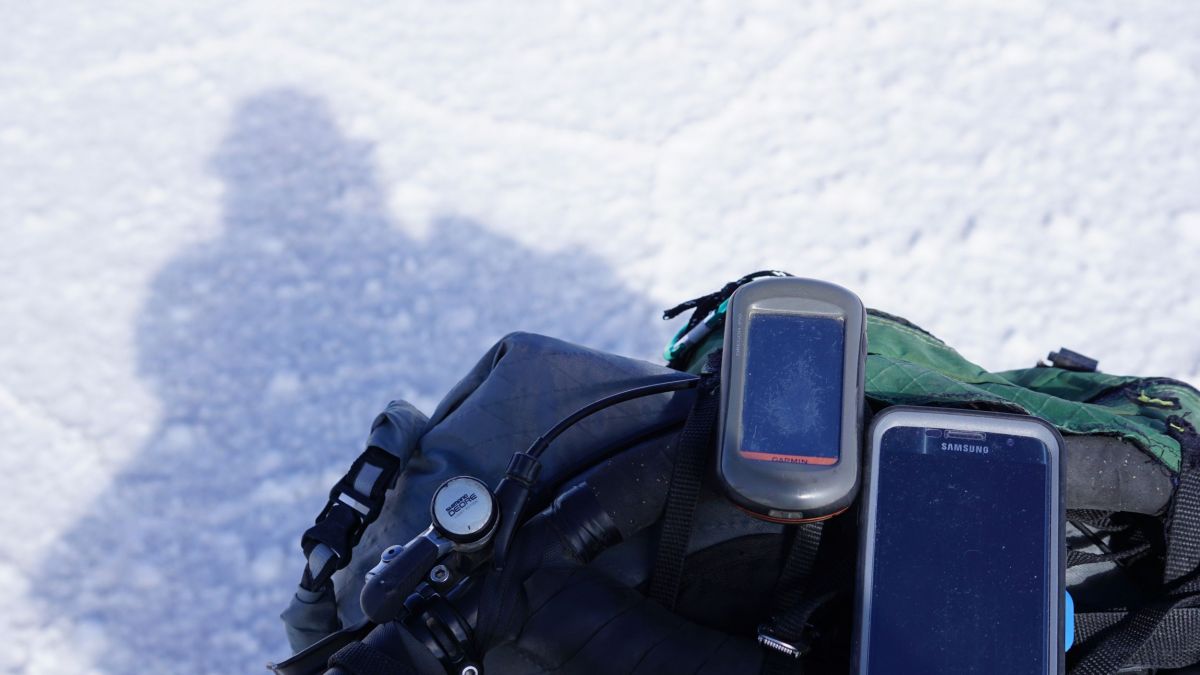 Cooking was mainly taken care of by sea to summit gear. We have an ever expanding range of their products appearing in the shop. So come by sometime to find out what are some the staff favorites for bike camping.

Water was always a challenge to find thus we carried a minimum of 4lt each per day for cooking and drinking. Velo Orange Mojave cages are fantastic for carrying Nalgene 1 and 1.5 lt Nalgene bottles or XL Klean Kanteen bottles. This allowed for 3 lt of water on my forks. Given the altitude and dry environment, I found I was drinking most of it every day so was grateful for the extra storage. Be aware that on really challenging terrain it is worth adding loctite and checking the bolts on these cages regularly as they can work loose (this goes for anything bolted to the frame). Further to this we had some MSR water bladders for extra water carrying duties.

This little guy is pushing four years old now and has been flawless! I mainly used it to charge cache batteries and the phone. The only downside on this particular trip was I did spend a lot of time doing less that 10km/h, so it wasn’t always feeding power back into my devices at maximum efficiency.

This device proved invaluable. The sun is fierce out here and we managed to get two full charges (5200mah) out of it most days. It also neatly hooked onto the Apidura saddle pack to catch the rays all day. It would probably hook onto the top of a pannier set pretty easy too! 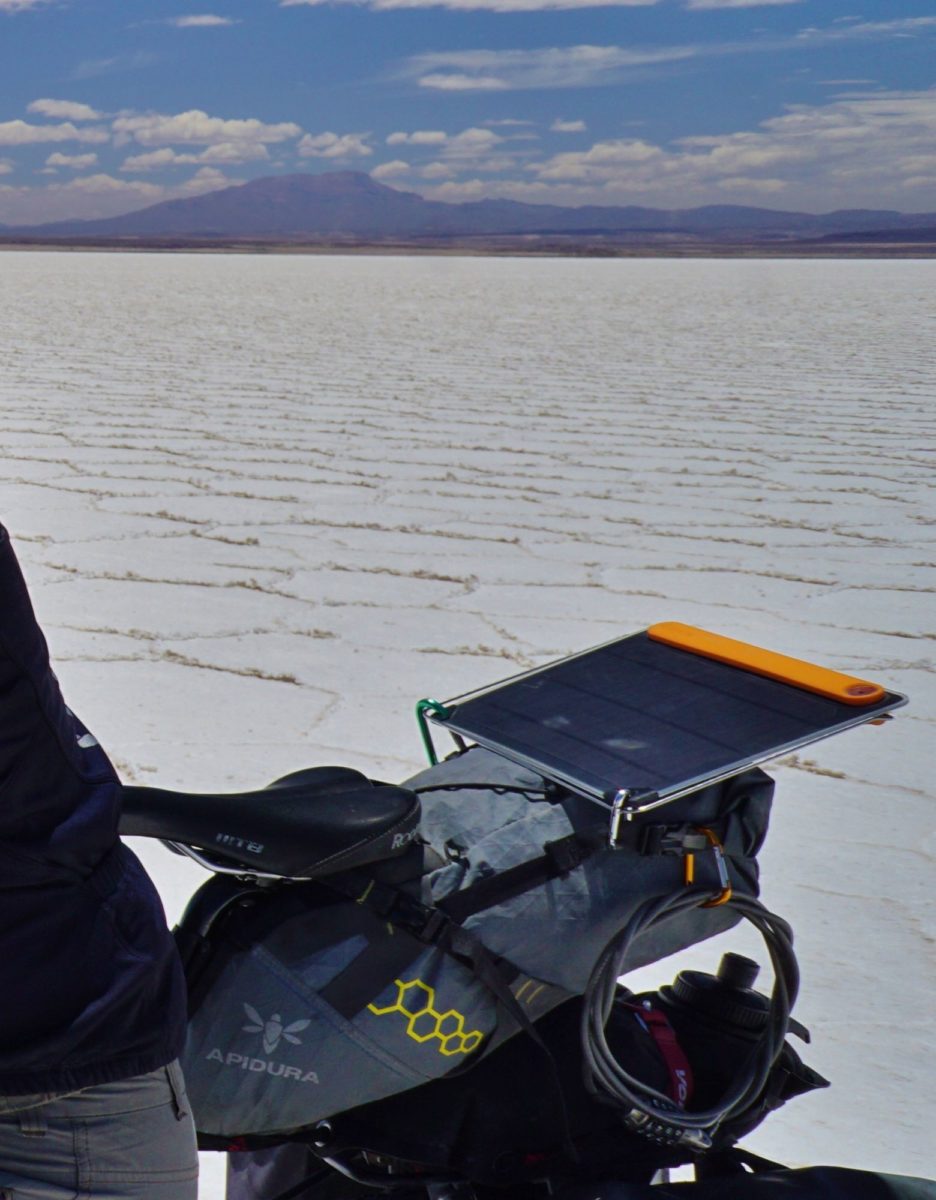 We opted for something in between a traditional touring set up of four panniers and superlight rackless bikepacking. Squeezing everything into backpacking bags was never going to happen for this kind of trip, we just needed too much food and water. We also planned time off the bike and wanted that to be comfortable. Running all the bikepacking kit plus small panniers worked really well!

The Ortlieb gravel Panniers are made of the same super tough material as their bikepacking line. They utilize two hooks on the bottom for an extra secure fit. At 12.5Lt per bag they offer 9Lt more than their saddlebags. They performed brilliantly during the trip, the only downside being you can’t overfill them due to the way the roll top construction works.

Overall the bikes performed brilliantly. Other than the application of chain oil, no other maintenance was needed. On a final note, my rear hydraulic brake lost some function and needed to be pumped before it engaged. Maybe mechanical disc brakes are a better idea on high altitude jaunts where air bubbles can expand in the master cylinders?